The fish, Human savior of the flood 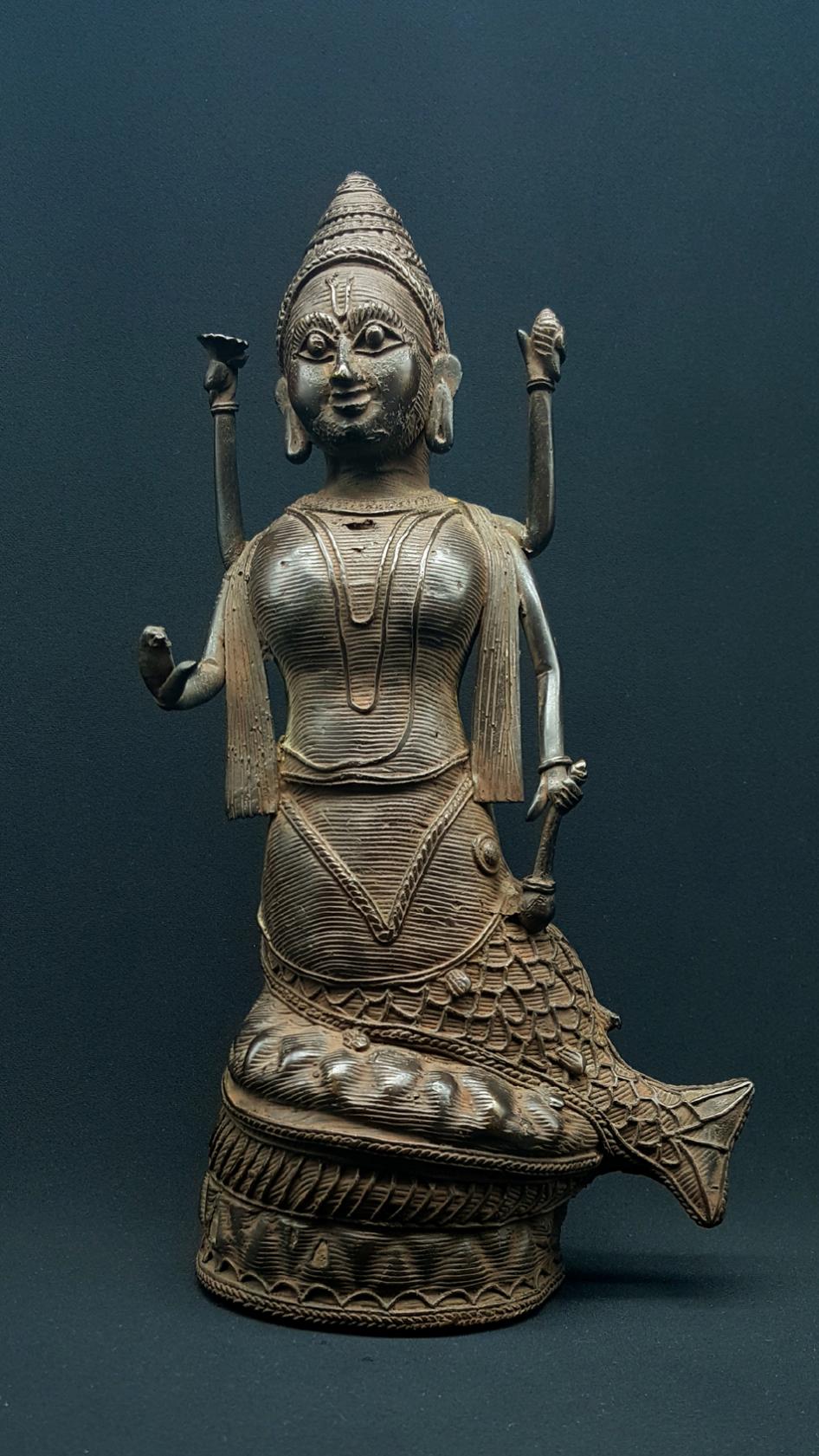 The fish, Human savior of the flood


Matsya, the second incarnation of Vishnu, symbolizes the savior of the world and the flood but also the preservation of the Vedas: great finesse of realization and beautiful patina. More... 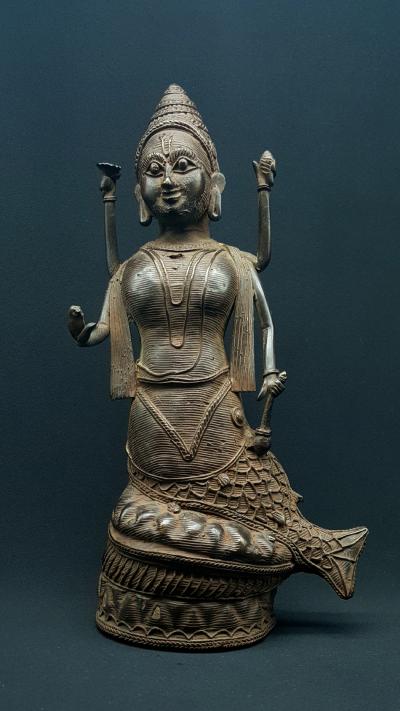 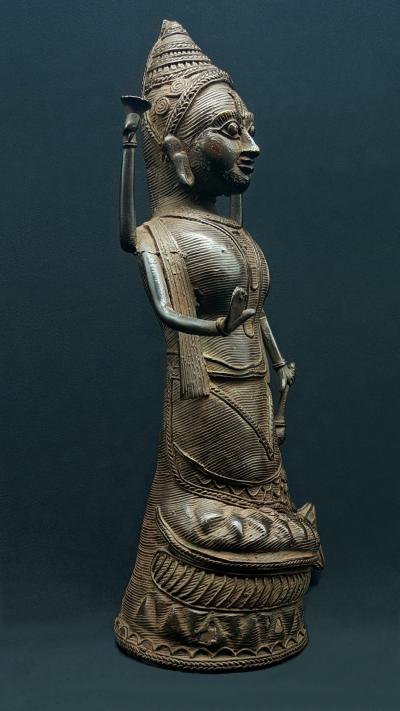 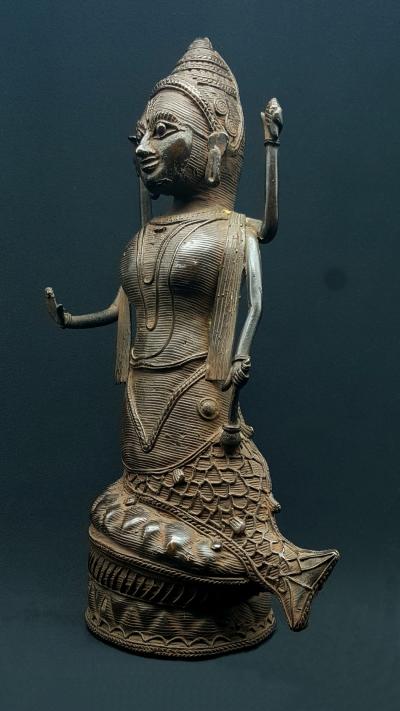 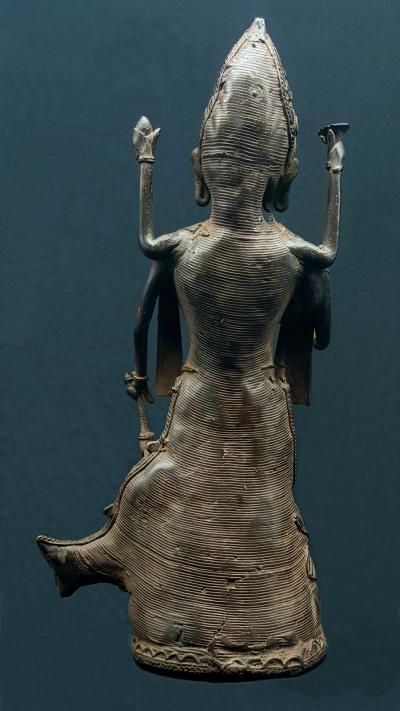 Vishnu in the Hindu pantheon represents the second aspect of the trimurti (with Brahma and Shiva): Vishnu is the One who preserves, protects, sustains life. He is the guarantor of order that allows everyone to flourish. Attentive, benevolent, he does justice, ensures peace and can also prove to be a formidable warrior if need be.

The avatars of Vishnu are one of his characteristics: as soon as the manifested world goes through a destructive period, Vishnu intervenes in a particular form in order to restore harmony, the balance that allows life to unfold again.

In this cycle, Vishnu was incarnated in a living body ten times: the fish, the tortoise, the boar, the lion man, the dwarf, Rama with the axe or Parashurama, Rama-Krishna, Buddha and Kalki (still to come).

This traditional and artisanal art has not changed for millennia (more than 4000 years) and the technique used is still that of lost wax: a rough model in clay is made and then covered with wax by the artist who will give it its final shape with its details. The whole is again covered with a clay mixture and then heated in an open hearth where a copper alloy will be cast. see Blog.
The objects produced by the Dokra artists can be of usual nature: dish, candle holder... musical instruments (brass), or artistic such as jewelry, animals: horses, elephants, turtles..., statues of men and women representing scenes of daily life and Hindu deities adopted by the tribes: Ganesh, Lakshmi, ...

This tribal statuette Dokra of Matsya Vishnu symbolizes: the fish, savior of the flood and the Vedas..

There are several stories about Matsya's coming: one of them tells that Manu, considered as the first human on Earth (like Adam) found a small fish: the latter asked him to protect it, telling him that he would save it from the flood many years later. Manu then watched over Matsya who grew up and took such a big place that only the ocean could contain him. When the time came, like Noah, Manu built a boat and housed the wise men, plants and animals in it. It is thus that Vishnu saved humanity but also the Vedas that the demon Haryagrîva had hidden in the ocean.

Gestures Right side, arm raised, the hand holds the lotus. His first left hand holds the club. The other left hand, elbow bent, holds the conch while the second right hand makes the gesture of protection, of absence of fear.

The club : Kaumodaki "The club is the power to know" (Vishnu Purdna). Primitive weapon, certainly, incarnation of the brute force but also of the mastery of instinctive, physical forces and nature. It is the weapon of mastery of the mind par excellence. It is also the weapon of predilection of Kali.
The conch is related to the primordial breath, the origin of life. Panchajanya (Born of the Five Elements), the low-pitched sound keeps the demons away but above all symbolizes infinity and expansion (the rings start from a point and expand endlessly). It comes from water, at the origin of creation. The sound it produces is considered as the primordial sound. The conch is connected to the element water.
The lotus : Padma, symbolizes purity, beauty, perfection. It is the mother's breast, the matrix from which all things come. It is the seat of the feminine principle, the Shakti.
The lotus gives a flower of all beauty, whereas it comes from a swampy, obscure, repulsive environment: it therefore represents the possibility of transformation, of elevation.