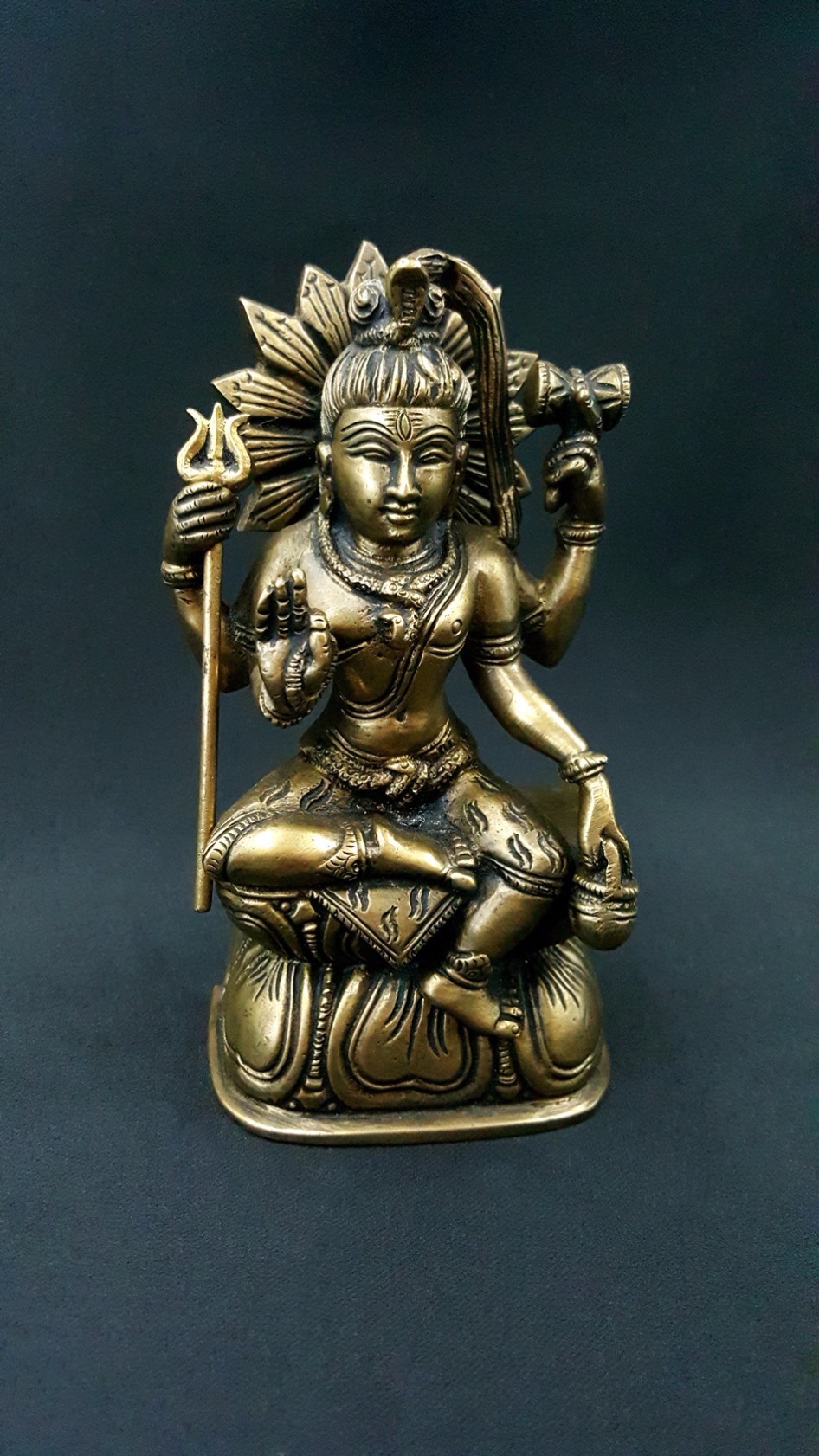 
Statue of Mahayogi that synthesizes the qualities necessary for the seeker of the absolute: mastery, strength, perseverance, union of apparent oppositions. More... 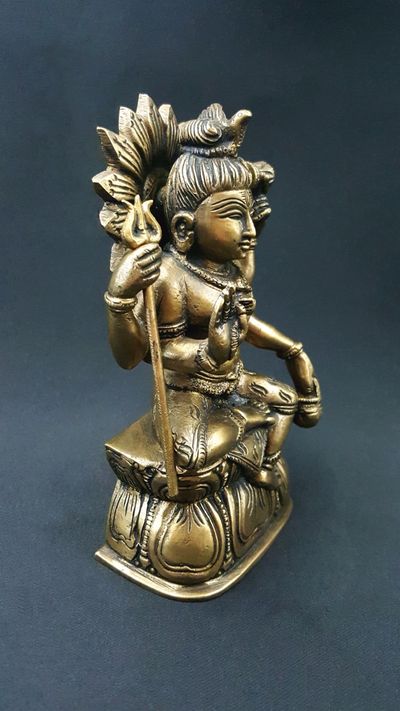 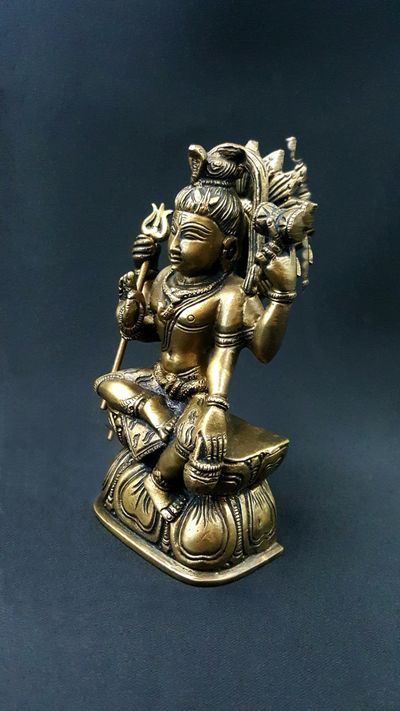 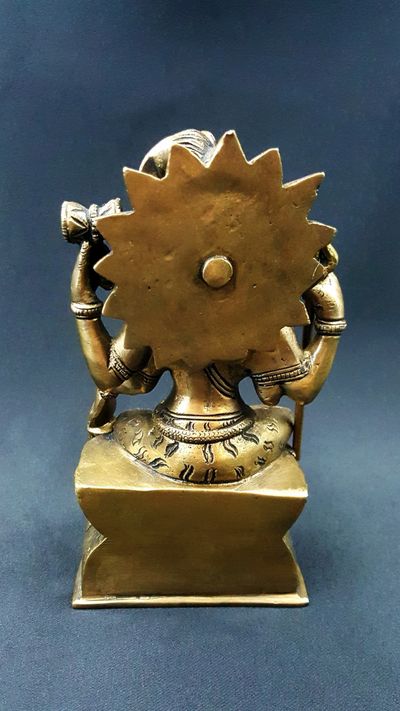 Shiva is one of the three gods of trimurti with Brahma and Vishnu: he represents the destroyer but also the regenerator, the liberator, the beneficial.

Shiva has more than 1000 names as well as many forms: Shambhu the beneficent, Rudra, the howler ... Here Shiva is represented in a form very venerated in India, the ascetic: it symbolizes the destruction which allows the regeneration, which allows liberation (moksha): liberation from the illusion of forms, from the ego, from attachment to the past - to its conditioning which prevents us from rediscovering our primordial nature, full consciousness - atman.

Shiva is therefore both terrible and beneficial, the union of opposites: manifested/unmanifested - masculine/feminine - darkness/light ...

This statuette symbolizes: meditation - mastery of the mind - the mystical quest (Sadhana)

Posture Sitting - in the half-lotus position (Virâsana) - characteristic position of the deity who defeated the demons.
His powerful body represents strength. He sits on a tiger skin which symbolizes his mastery of the impulses, the instincts which can dominate us.

Head A high bun topped by the cobra. The crescent moon, on his forehead (in his hair), symbolizes the cup: it contains Soma, the liquor of eternity but also symbolizes the immutable cycle of death/birth. The third eye in the middle of the forehead represents the fire of knowledge

Gestures Right arm, bent elbow holding the trident (probably, with the cobra) the best known attribute of Shiva. The second right arm, elbow bent with the hand making the gesture of protection (shrishti)
Left arm, elbow bent upwards holds the Damaru, the relaxed second left arm holds the water pot ??which does not leave the saddhus, the ascetics traveling in India.

Clothing Shiva, naked symbolizes the stripping characteristic of the ascetic only dressed in the sacred cord (yajnopavita).

Jewelry No jewelry except for a few discreet bracelets reinforcing the aspect of renunciation proper to asceticism. His adornments are cobras!

Base The gods never touch the ground: the earth is the domain of beings of flesh and blood.
Lotus base: Padmapitha - the lotus symbolizes the mother's womb (origin of life), wisdom: the knowledge that leads to enlightenment, purity (and therefore the transformation that allows the expression of beauty in a marshy environment), peace.

Attributes
The wheel of fire: wheel of the universe, life cycle; birth/destruction. It also represents the fire which illuminates or which destroys ignorance and/or which fertilizes.

The damaru: the drum evokes the primordial sound preceding the creation but also the final sound of the birth/death cycle in the manifest. This sound therefore also symbolizes rhythm, cyclical time in the manifested world. Shiva is also the master of time.

The trident: the three teeth represent the Trimurti: creation - preservation - destruction (but also the 3 three Gunas ....). It is also a powerful weapon symbol of lightning that fights demons. Here, its long handle represents the axis of the universe.

The snake: here the cobra, symbol of regeneration, and of energy (Shakti).

The water pot (kamandalu) which, through water, symbolizes fertility. 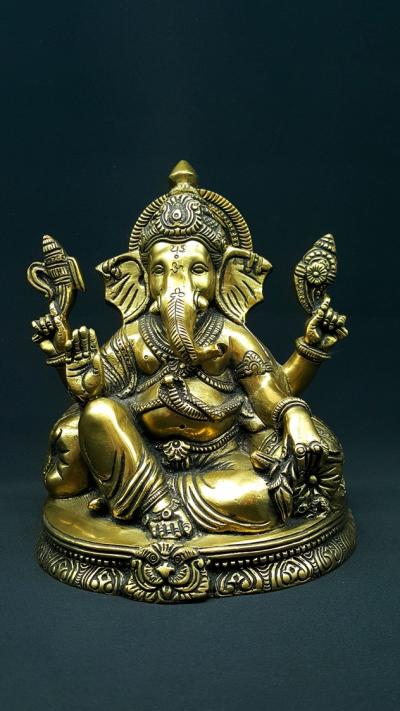 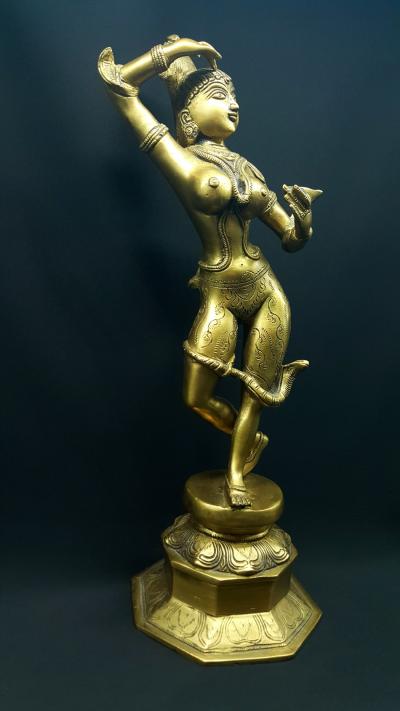