The one who wears the moon in his hair 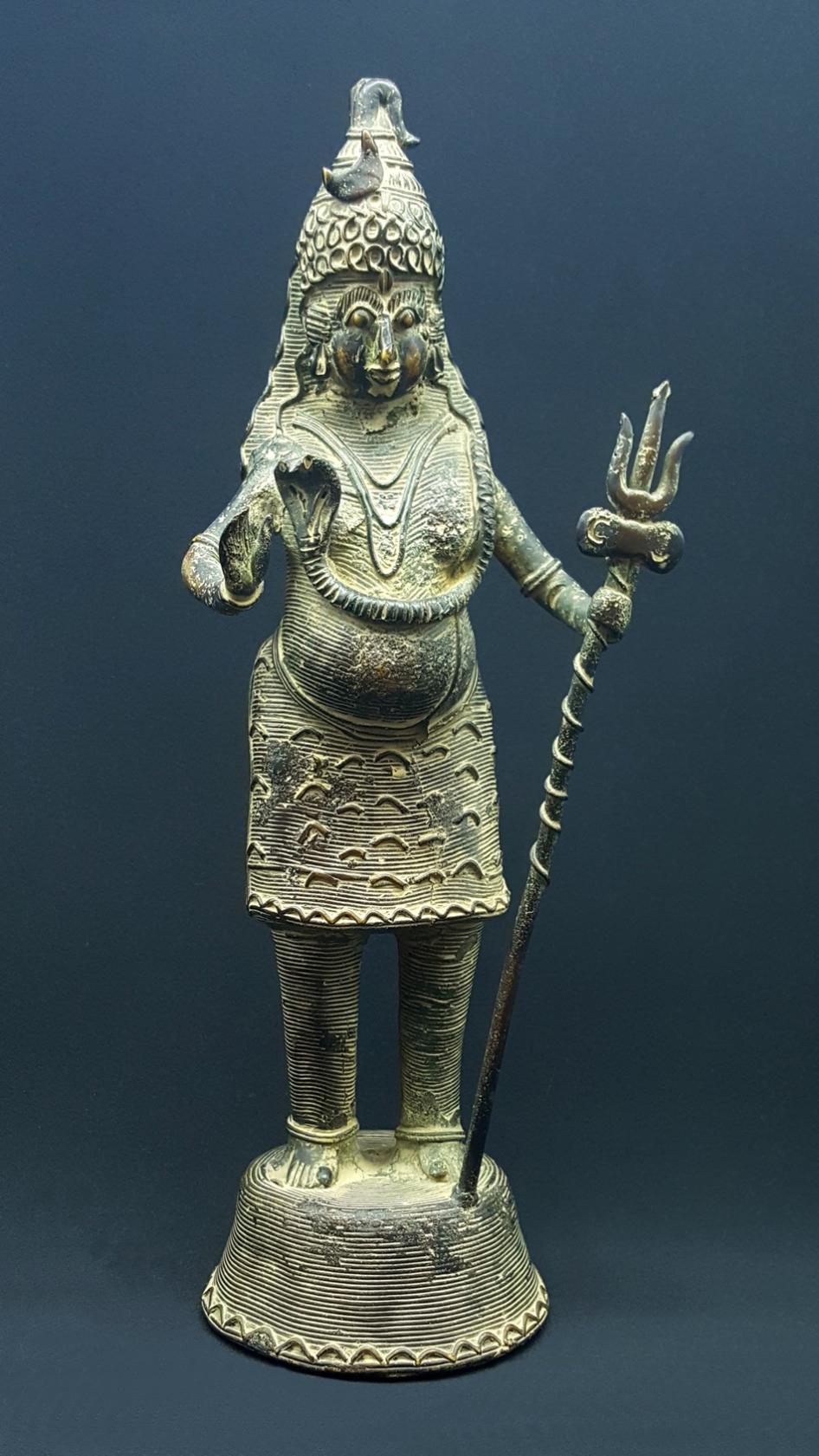 The one who wears the moon in his hair


This tribal statue of Shiva respects the symbolic and aesthetic canons of Hindu sacred art while giving it a characteristic note of Dokra art: beauty while simplicity More... 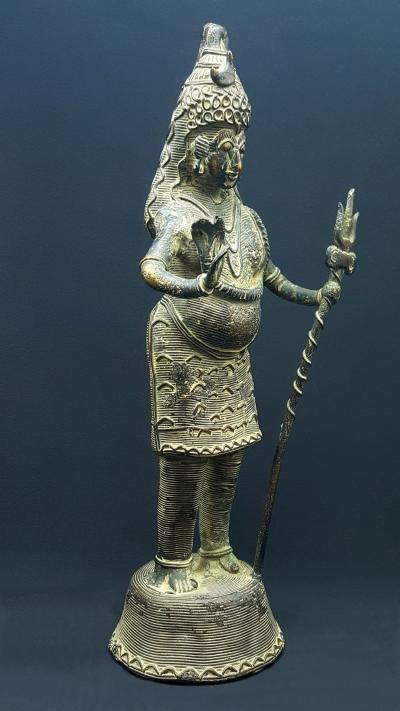 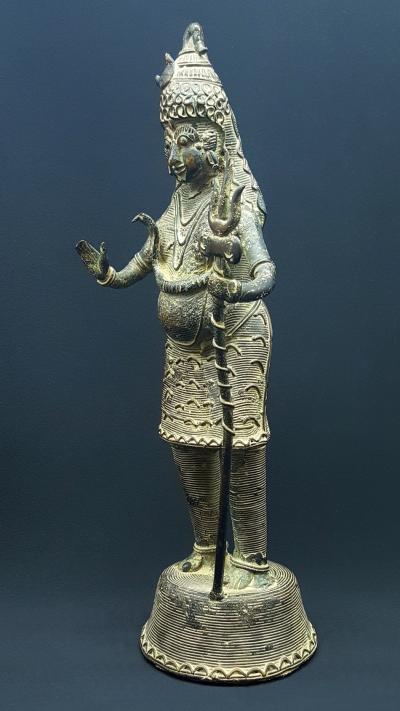 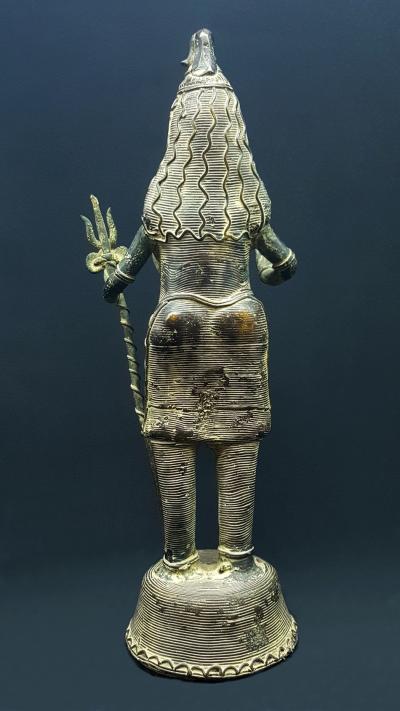 Shiva is one of the three main gods of Hinduism with Brahma and Vishnu who form the Trimurti: Brahma represents the creative principle, Vishnu, the preserver and Shiva the destroyer who allows the renewal. These three forces are inseparable, complementary and opposed.

Shiva symbolizes the destruction that allows regeneration, that allows liberation (moksha): liberation from the illusion of forms, from the ego, from the attachment to the past - to its conditionings that prevent us from finding our primordial nature, the full consciousness - the atman.

Shiva has more than 1000 names and many forms: Shambhu the beneficent, Rudra, the howler... Here Shiva is, in this statue, represented in a beneficial form, Chandra Sekara: Chandra means the moon and Shekara refers to the crown, that is to say the one who wears the moon in his crown or his hair.

Legend has it that Daksha had married his 27 daughters to Chandra. However, he learned that Chandra was neglecting 25 of them to take care only of Rohini and Kartikai, which caused a deep disharmony. Daksha, furious, decided to punish the Moon by making it lose its luminosity. Chandra then began to do penance, but Daksha remained intractable, so he called upon Shiva: benevolent and protective, he placed Chandra in his hair and allowed her to light up in periods of 14 days, ascending and then descending.

This traditional and artisanal art has not changed for millennia (more than 4000 years) and the technique used is still that of lost wax: a rough model in clay is made and then covered with wax by the artist who will give it its final shape with its details. The whole is again covered with a clay mixture and then heated in an open hearth where a copper alloy will be cast. see Blog.

The objects produced by the Dokra artists can be of usual nature: dish, candle holder... musical instruments (brass), or artistic such as jewelry, animals: horses, elephants, turtles..., statues of men and women representing scenes of daily life and Hindu deities adopted by the tribes: Ganesh, Lakshmi, ...

This statuette symbolizes: benevolence, the one who gives bliss

Posture Standing, in the posture known as Samabhanga, without bending, unchanging. He is serene, appeased. His powerful body represents strength. His legs evoke two unalterable pillars.
His belly is large as it is often represented in Ganesh: it is the center of vital energies. It symbolizes anchoring, presence here and now, stability.

Head A high bun topped by the cobra. The crescent moon, on his forehead (in his hair), symbolizes the cup: it contains Soma, the liquor of eternity but also symbolizes the immutable cycle of death/birth. The third eye in the middle of the forehead represents the fire of knowledge.

Gestures The left arm, elbow bent, holds the trident, the most famous attribute of Shiva. The right hand makes the gesture of protection (shrishti).

Clothing As always, sobriety in clothing characterizes Shiva. The sacred cord of the Brahmins, marked by a very discreet thread, adorns his belly.

Jewelry No jewelry except for a few discreet bracelets. The earrings on the left and on the right embody the ambivalence of Shiva: beneficial and destructive, masculine and feminine...
His ornament is above all the cobra!

Attributes
Le trident: the three teeth represent the Trimurti: creation - preservation - destruction (but also the 3 three Gunas ....). It is also a powerful weapon symbol of lightning that fights demons. Here, its long handle represents the axis of the universe.

The snake symbol of regeneration, and of energy (Shakti).

This tribal statue of Shiva respects the symbolic and aesthetic canons of sacred Hindu art while bringing to it a characteristic note of Dokra art: lost wax technique using the wax thread and particular expression of the face.