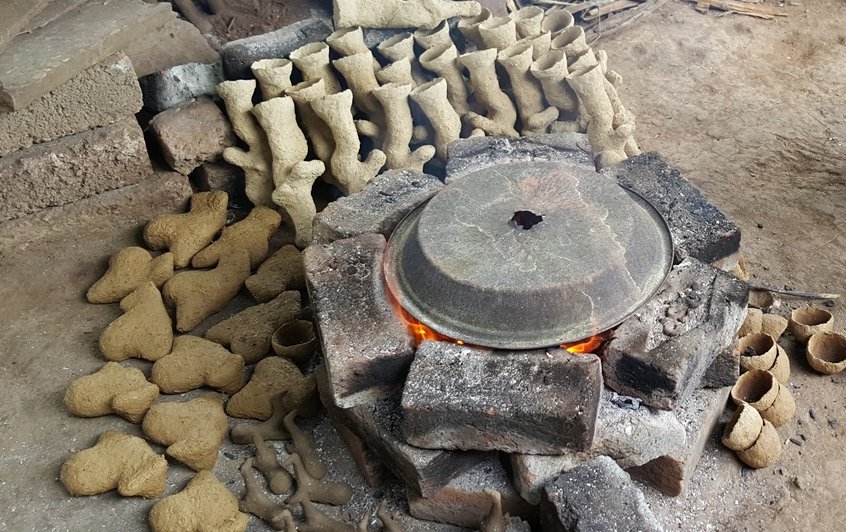 The tribes, practicing the Dokra art, originate from the Bastar region, in South India (today located in the state of Chattisgarh), they emigrated several centuries before and settled almost everywhere in India, from North to South. Most have kept their tradition (culinary art, clothing, ceremonies, etc.) and their animist religion.

The technique used for the manufacture of brass statues is always that of lost wax.

This traditional art and craft has not changed for millennia (more than 4000 years), traces of it can be found in the civilization of the Indus Valley in Mohenjo Daro, notably with the famous sculpture of a dancing woman.

This tribal art makes it possible to discover both an artisanal know-how but also to approach another culture in India: a daily way of life, the relation to the sacred ... Tribal art tells us a history in a concrete and aesthetic way.

The tribes live in symbiosis with nature: the notion of land ownership is nonexistent. They feed on what nature provides them: hunting, gathering, agriculture. They use the resources of the forest to build their dwellings, to make certain festive ornaments (for their clothes for those who live far from the cities), certain jewels (shells)...

Today many have adopted (by choice or necessity) a more urban lifestyle but remain closely linked to the nature with which they live in harmony.

An art close to everyday life and the sacred

The forms are simple, strongly expressive, with often the use of disproportion to highlight an aspect, a peculiarity of the subject represented: the works exude a direct expression that touches us strongly and fills us with lasting wonder. The artist seems to go to the essential, the fineness of detail does not overload the statue.

The works produced by the Dokra artists can be of a usual nature: cup, candle holder ... but also musical instruments (brass) used during ceremonies, rituals or artistic objects such as jewelry.

The sacred dimension is also strongly present with the representation of animist deities (Devi, Jetku and Mikti ...) or Hindus adopted by the tribes: Ganesh, Lakshmi ...

This art is practiced in the family, each one contributing according to his or her possibilities and skills. Everyone works outside, in the yard of the house or under an awning. Sometimes the baking oven is common to all the villagers, elsewhere each family casts its statues at home.

Most of the works produced are now sold to wholesalers who sell them in India where Dokra art begins to be recognized by both the government and the amateurs. Part of the production is also sold on local markets, especially for everyday items. However, living conditions remain precarious for most Dokras artists today.