The Chola dynasty experienced a prosperous period from 1 ° to 3 ° BC when its presence extended to Ceylon before sinking into anonymity for centuries and its withdrawal into its territory of origin (Uraiyur- basin of Kaveri river) until its new boom marked by its victory over the Pallava in 887 (dynasty which dominated South India from the 4th to the 9th century AD: it is notably known for having built the magnificent and imposing set of monuments in Mahaballipuram (carved in granite)).


The Chola, a long presence in south india

The Chola were originally installed in Tanjore (in present-day Tamil Nadu) from the 9th to the 11th century, then the capital moved to Gangaikondacholapuram, a royal city built at the time of the heyday of the Cholas under the reign of Rajendra I to celebrate the victory over the Pala of Bengal and the kingdoms of the Gangas of the east. The kingdom then extended from Sri Lanka to Bengal, passing through Kerala, Karnataka even reaching Sumatra and the Adamans and Nicobar Islands. The kingdom is then a power which shines beyond the seas thanks to a powerful fleet, to trade and to its religious and cultural influence.
The spoken and written language is Tamil: the territory in the south is divided into areas called Nadu, dominated by the local dynasties conquered by the Cholas: Tondai nadu, Madras ruled by the Pallavas, Pandi nadu, Madurai under the influence of the Pandyas and Kondus nadu around Coimbature. The power exercised by the Chola leaves an important place to the local powers and the regions retain a strong autonomy. The aristocrats, the warrior caste (the Kshatryas) and the Hindu clergy (the Brahmans) are the two orders which jointly rule the kingdom, hence the importance played by the regional temples which over time will assume a considerable place. The worship of Shiva is essential, Buddhism is tolerated.

Art under the Chola owes much to the Pallava to whom they succeeded.
The architecture of the temples takes up the basic structure: the core, the heart of the temple is the hall of worship (called Garba Griha or "chamber of the belly") built on a raised base (often decorated with low reliefs) which is surmounted by a pyramid-shaped tower called Vimana (this is the fundamental difference with the Sikhara, developed in northern India, which has a curvilinear shape, made of sugar loaf), itself covered with a dome.
The Chola specificity will come from the enlargement and embellishment of this basic structure.
Thus to the sanctuary will be added vestibules, antechambers, inner courtyards, various rooms, pavilions, wells and basins, subsidiary temples and enclosures with portals. Sometimes they also house the stables of the elephants. The "simple" temples become temples villes gathering a large number of priests, employees, artists ... and attracting to its surroundings a large number of inhabitants, merchants and craftsmen. The ensemble follows a west-east axis, gateway to the east.

The various rooms, called Mandapa, are used for different rituals (assemblies of the faithful, celebration of the union between the deity and his Shakti, religious teaching ...) while the pavilions (mandir) can be used for dances, be places of offerings.
Overall the walls are thick, the corbelling is required for the realization of the multi-story towers.
The halls, inherited from the Greeks, are built in the hypostyle form, that is, the roof is supported by columns. 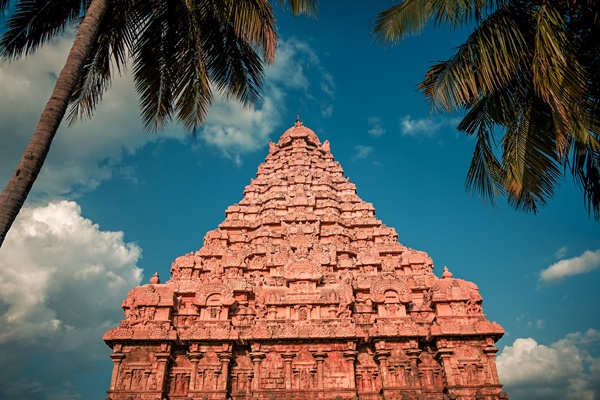 Vimana as well as the Gopura (the portals, generally four in number, marking the entrance to the enclosure) become higher and higher: they rise by successive floors and over the decades are marked by an enrichment and exuberance of various sculptures and decorations (deities, dance scenes ...).
The temple of Rajendreshvara or Pragatishwara at Gangaikondacholapuram, which means "he who takes over the Ganges" built at the height of the empire to mark the advance of the royal troops to the banks of the Ganges is representative of this art.
So is the Brihadeshvara Temple (dedicated to Shiva Rudra) in Tanjavur, whose 13-story tower, topped by an 81-ton monolithic block, is 66 meters high (the temple celebrated its 1,000th anniversary in 2010). Numerous statues decorate the bas-reliefs, interior and exterior walls, niches, a true artistic abundance! At its creation, more than 1000 people worked there!

At the time of the fall of the Chola empire by the Pandyas, the architectural style evolved fundamentally little: it gained however in grace and ornamental richness.

The Natya-Shastra is a treaty dating from 500 B.C. to +500 A.D.: it can be considered the fifth Weda and describes the precepts governing the sacred arts: the objective is to bring the spectator, through the vision of one of this arts, to the knowledge of the ultimate truth, the absolute.
It enumerates the aesthetic canons and concerns mainly theater, dance, music and literature: the text describes the use of eight feelings - erotic, comic, pathetic, terrible, furious, obnoxious, heroic and marvelous - that will allow the spectator to get a spiritual experience.
The sculpture was thus strongly inspired by the dancers' postures and gestures.
It is then easy to understand that sacred dance was a primordial art during the Chola period. The Natya Shastra states in the closing chapter, verses 36.20-21, that the performing arts such as theater, songs, music and dance with music are as important as attending Vedic hymns and that to participate, even once, in vocal or instrumental music is superior to bathing in the Ganges for a thousand days.
The temple of Brihadeshvara, at its creation, at the beginning of X°, sheltered more than 400 dancers of Bharata natyam. 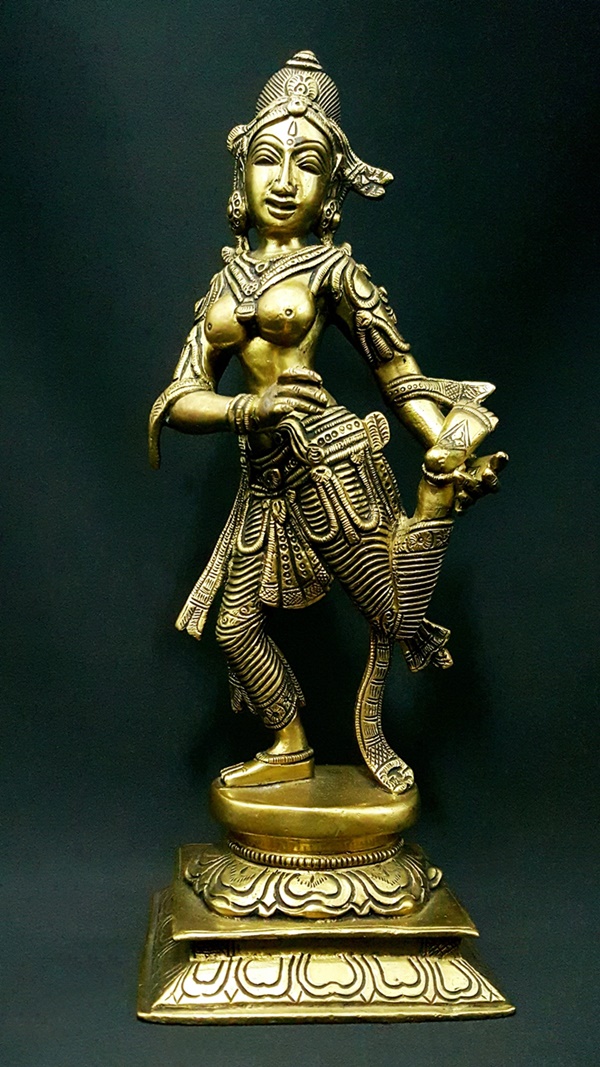 Sculpture under the Chola

The Pallava period is marked by monumental sculptures (see the Mahaballipuram site) which show a great finesse of realization.
Sculpture under the Cholas is in this continuity and will find its apogee in the making of magnificent bronzes.
The mastery of the lost wax technique, already known since the Indus civilization (see the sculpture of a young dancer from Mohenjo-daro dating from the 2nd or 3rd century BC), is then total.
The lost wax technique consists, in a first step, in making a rough model in clay which is then covered with wax by the artist who will give it its final shape with its details. The whole is again covered with a clay mixture (comprising several layers) and then heated in an open hearth: the wax then flows through holes provided for this purpose and a bronze alloy is cast in the space freed. The Chola artists have reached an unrivalled expertise both in the quality of the realization of the wax model, where the excellence of the finish is extraordinary, and in the metal alloys used, where copper plays a predominant role (and which sometimes mix gold, silver... inlays of valuable stones for the most precious statues).
The vision of a sculpture of this period allows one to appreciate the mastery achieved by the Chola artists: a perfect realization in the smallest details, a balance in the forms, the proportions, a great simplicity of the features which allows the work to express a grace, a great finesse, a fluidity and even a certain sensuality while being restrained: the whole gives off an impression, a refinement which sharpens the senses and lets the faithful glimpse a dimension of another order. 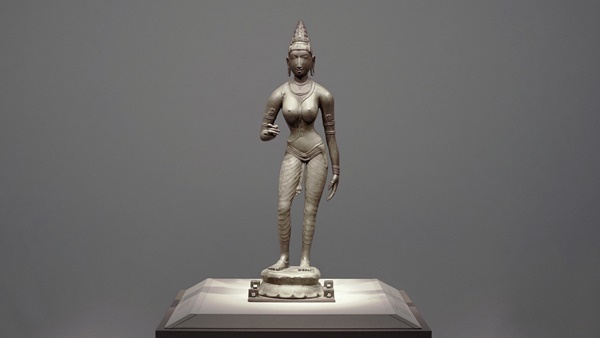 Shiva is of course the most represented deity because Shivaism is the official doctrine of the Chola aristocracy. The form of Shiva Nataraja is the best known: Shiva Nataraja is usually represented standing, dancing, in a circle of flames, symbolizing the perpetual movement that constantly animates the universe.
There are different forms of Nataraja and Shiva may have different attributes, postures, hand gestures (mudras), however whatever the form, it meets a precise codification drawn from the Natya-Shastra.
Classically one of his four arms holds the Damaru (drum): the sound of the Damaru represents the primordial sound, the one that generates a new beginning but also the rhythmic impulse of the universe in opposition to the other hand that deploys the fire that destroys and renews. These two symbols put in opposition underline the incessant movement of creation/destruction which constantly animates life.
The second right hand can make the gesture of protection (shrishti), of the absence of fear. The left foot crushes the dwarf Apasmâra who represents ignorance and oblivion (of our true nature), the raised right foot represents the refuge from the whirlpools of the world.

The development of bronze statuary art calso corresponds to a period when deities began to leave the temples to be shown and honored in processions. Thus one can see four rings on the base of the statues that allow wooden poles to be mounted on them and thus to walk the statue during the feast days dedicated to it.
The bronze statues, placed in a sanctuary of their own, are venerated as the deities they represent: they are first consecrated, a ceremony whose objective is to give them life: they are no longer just a form representing a deity but they become its channel of expression, they are animated by its presence, its strength: they can then symbolize the qualities of the deity in the manifested world.
Every morning, they are awakened, washed, fed, dressed and honored by mantras, songs, offerings of the faithful...

The tradition of making sacred bronze statues is still alive today and in Tamil Nadu, the Tanjâvur region is still an important place of production internationally recognized. 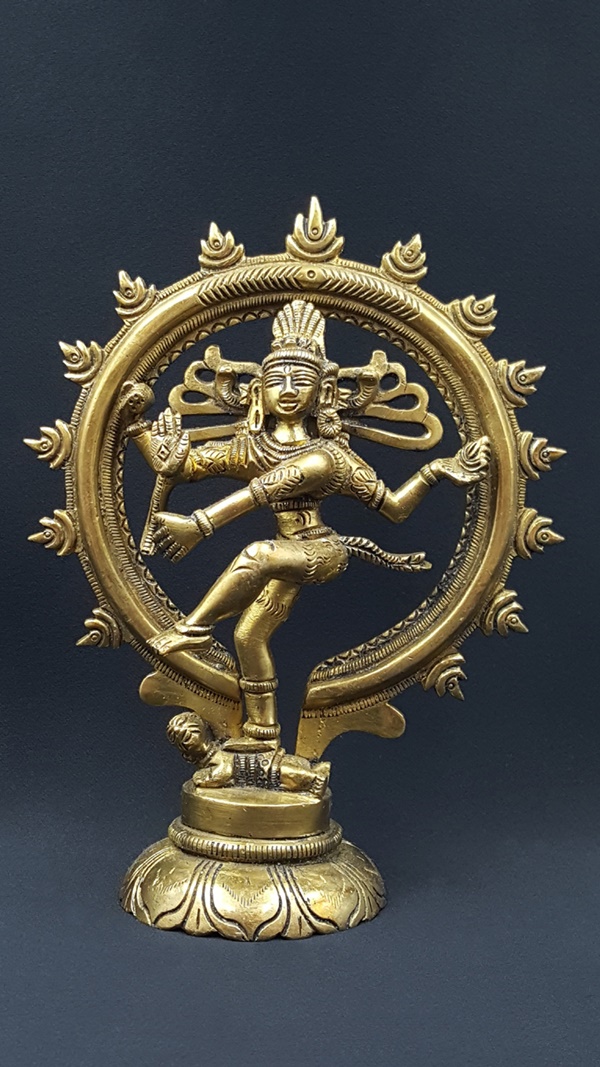