The Guptas, a huge empire

The empire emerged around 320 A.D. in Bihar in present-day India. The Guptas were a local feudal dynasty that gradually conquered, under the reign of Samudragupta, all of northern India and and even made pay tribute to neighboring states, such as Nepal, Assam…. Then his successors continued to enlarge their kingdom until they unified a large part of India (except the south). The empire reached its apogee in 415-455 AD under Kamaragupta.

As early as Chandragupta II The Great, the religious and cultural foundations are established: this period is marked by a great refinement: the power in place favors at the same time, the development of the general knowledge and especially the science one but also an extremely rich cultural life both in the field of music, painting (see the cellars of Ajanta), literature, architecture and sculpture. This Gupta empire, no doubt idealized, represents a golden age where opulence and peace reigned, allowing an extraordinary cultural development.

Strongly inspired by Kushan art, which had preceded and continued in the city of Mathura, Gupta art will gradually develop its own characteristics.
The artistic emblem of this period may be a red sandstone statue of Buddha, sculpted standing and surmounted by a huge halo. The Buddhist religion is then the dominant religion among the elite (aristocrats, merchants, intellectuals ...).

The statues of Buddhas are then very finely chiselled and especially one can note the slackening of the features compared to the Kushan time which privileged the expression of the force, the vitality, the energy: a strong impression of relaxation which is found in the quality of the details and which is reinforced by the simplicity of the unit. The style remains very classical and realistic, inherited from the Greeks, the forms are harmonious, well proportioned; the search for perfection is paramount.
The objective of the artists is to transmit an impression of deep peace linked to a state of inner realization: liberation from the manifested world, serenity, detachment.
The silhouettes are slender, the faces are marked by the delicacy of the features which are few in number: eyebrow arches just underlined, the bridge of the nose straight, elongated eyes slightly protruding, closed eyelids marking the interiorization. The ears with stretched lobes (sign of an old wearing of earrings) mark the old princely state of the Buddha.

In addition these artistic characteristics of elegance, of perfection will also be found in the evolution of the architecture of the Stupas (the round form disappears to the profit of the slender vertical form, in arrow), of the Bodhisattvas just like the princely characters who are dressed very simply with meticulously engraved jewels.

Sculpture: a means of spiritual transmission

We can identify two great styles of the Gupta era linked to two major production sites: Sarnath and Mathura.

Sarnath: the Buddha is represented in a very purified style, wearing transparent clothing not pleated (of which one often sees that the folds at the level of the wrists or at the level of the legs in the sitting position), the head, surrounded by a halo, is surmounted by the typical protuberance, the eyes are half-closed or almost closed: very great smoothness of execution expressing a state of deep interior peace.
The aureole or the low reliefs (for example on a statue of Buddha preaching the Law in Sarnath- 5th century), when they are present, appear on the contrary often very loaded or even with a monumental dimension with many motives, decorations and symbols expressing the life of Buddha, his teaching....

Mathura (about 140 km from the current Delhi in the south): classical form, search for balance, elongated form, use of red sandstone, the Buddha appears with a pleated garment mostly standing. The differences with the style of Sarnath are minimal, the form is slightly more dynamic (lips, eyebrows). 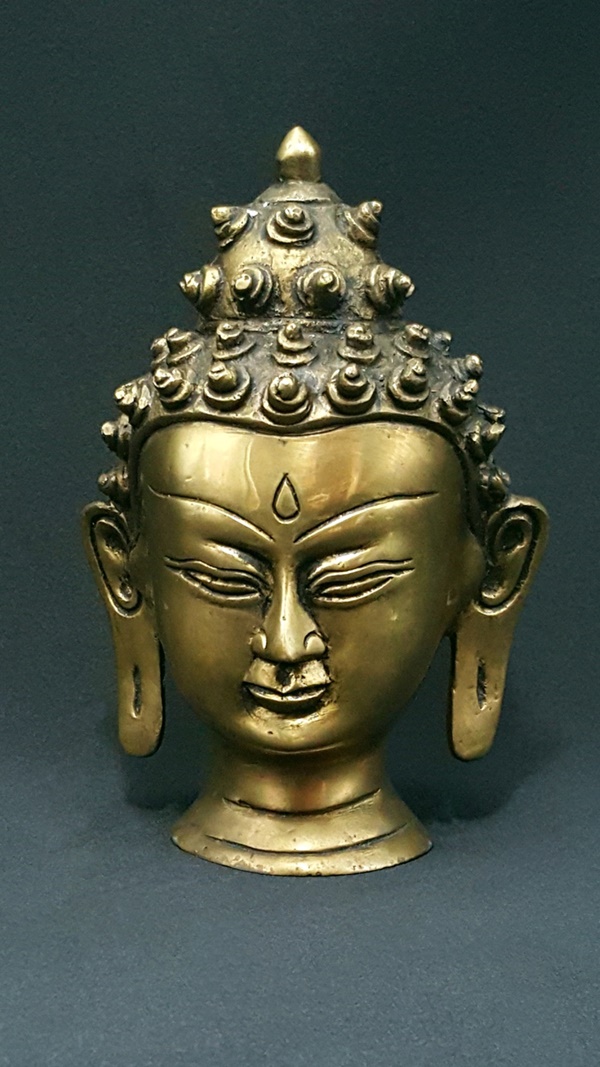 The purpose of the sculpture is to give a representation of the Buddha but also to transmit a teaching: in the bas reliefs, Gautama's life is transcribed with the different stages of his journey, the Buddha is also represented with different attributes: wheel of life … .Many decorative elements are also present: animals, Yakshi (female deities living in trees) ...

During this period, many cave-temples developed, using natural geological resources and particularities to develop specific sculpture and paintings: we can cite the sites of Ajanta, Ellora (4-7 ° centuries AD).

Hindu sacred art also unfolds in an intense way and it is perhaps the architecture that has undergone the strongest evolution through the evolution of the structure of the temples. In the Kushan period, the sanctuaries of Shiva, Vishnu... already consisted of several towers but under the Guptas, their style will be structured: with a square base, the tower is topped by a flat roof made of stone slabs. At the entrance, it may be accompanied by pillars, porches, or columns; Roman inspiration is prominent, but a distinctive style will quickly unfold: construction of the sanctuary, the heart of the temple where the deities reside, on a wide platform that will evolve into the shape of a cross, surrounded by a covered walkway, multi-story towers, and finally additions of subsidiary sanctuaries.
Toward the end of the 5th century and in the post-Gupta period, the Sikhara form (spire) imposed itself and dominated future sacred architecture.

In the Hindu sculpture, the elegance, simplicity and sobriety of the forms join that ones found in Buddhism: however the bas-reliefs of Deogarh (legend of Rama) or the Varaha of Udayagri (sculpture of Varaha, 3rd avatar of Vishnu in the form of a boar) let us foresee a great abundance of subjects and forms: they can thus relate episodes of the Ramayana or the Mahâbhârata (epics of the Hindu deities), many characters are carved: princes, heroes, gods, demons...

The dynamic aspect of the deities will depend on their manifestation: for example Vishnu, in the form of Krishna, Matsya... among his many avatars does not represent the same qualities as Vishnu, Narayana meaning "resting on the waters", where it is the passive aspect of Vishnu which is then materialized. An aspect which puts forward the plenitude, the contemplation, the passivity, the immobility: the non doing. 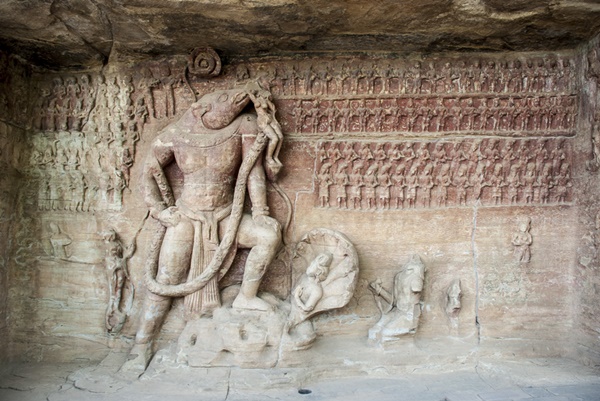 The representations of the Hindu gods answer a very rigorous codification: each form taken by a deity has a very precise meaning: each name of a deity corresponds to one of the aspects of the absolute and this divine manifestation will show characteristics proper to the teaching which is linked to it. This form will take a posture, perform gestures (mudras), put on adornments, colors, wear attributes and weapons, be accompanied by an environment, mounts that each transmit a very specific message.

The Hindu sacred art will thus combine sacred sculptures which represent plenitude, serenity as well as others insisting on the active, dynamic aspect: energy, the Shakti which unfolds in the materialized world (the world in which we live). It is thus in communion with the evolution of the Vedic religion towards Hinduism (which at the intellectual level sees the writing of the Puranas writing, from the 4th century, the appearance of the cult of images).
The abundance, the richness of the decorations, the characters... will continue to grow in the centuries to come, following the growth in the size of Hindu temples.

At the end of the Guptas era, the works begin to freeze, to lose their qualities of expression responding more to aesthetic canons than to the transmission of a spiritual teaching.
During this splendid period, the production of statues and temples was very strong: the works were highly sought after and could even be exported to countries where Buddhism was spreading. But the invasions of the Huns, the Gurjaras... which gradually brought down the Gupta dynasty as well as all the others which followed one another then the predominance of Islam and the Moghul empire left rather few testimonies.
Buddhism and Jainism declined with the progressive fall of the Guptas as did the artistic production which was financed by the power and the rich merchants.