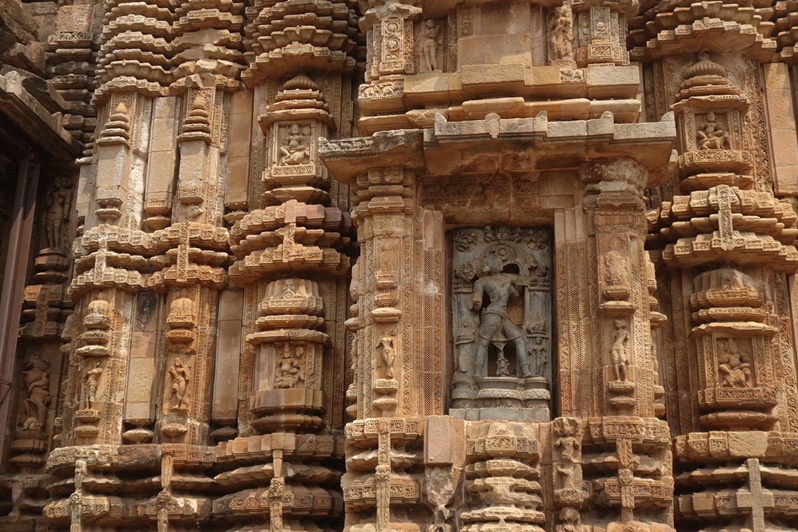 Hindu sacred art serves as spiritual food, accessible to all: it can have a transformative power. The important thing in the representation of a divinity in India is not the resemblance to reality but the message which is transmitted through this sacred image.

The general posture of the divinity will immediately give us precious information on the message transmitted by the manifested form of the divine. The main divinities, that of the Trimurti (especially Vishnu and Shiva and their consort Lakshmi and Parvati) as well as Krishna, Ganesh among others take different names and forms corresponds to the teaching transmitted.
Shiva, Mahayogi, or Shiva in the form of Pashupati, the herdsman do not have the same didactic role at all, nor therefore the same representation.

The divinity can thus appear standing, on its 2 feet or in balance on a leg, or still seated, in lotus, half lotus… or even lengthened. At first sight an impression emerges: relaxed, combative, wrathful, soothing or meditative posture?

Samabhanga "without bending" : the legs, standing, are stretched. The whole statue gives off an impression of perfect balance, of righteousness. A variant, Sthânu, the pillar, which also means the unchanging: this posture is used showing Shiva, yogi, ascetic in deep meditation, in immersion in the absolute .

Abhanga "with a single flexion" : the feet rest on the ground, one of the legs is in slight flexion, with the hip protruding. The weight of the body rests on the stretched leg: this posture indicates that the divinity is in an activity of deep reflection .
This position can evolve towards Dvibhanga or Tribhanga which implies for one, 2 flexions (leg and hip) and the other 3 flexions (hip, shoulder and neck) and indicates a benevolent attitude but it can also, especially in the dances, underline grace, sensuality (see the statues of the temples of Khajuraho).

On the other hand the Atibhanga, that is to say excessive flexions, indicates a lively or even violent movement (Shiva in destructive forms) and is used in the sculpture of Shiva Nataraja, or to represent dancing Krishna, indicating the perpetual movement which animates life .

Padasvastika : the legs are crossed, the body weight is supported by only one leg, foot well on the ground while the slightly bent leg rests on the tip of the foot. This is the posture often taken by Krishna playing the flute (Venugopala), it marks relaxation, divine serenity .

Alidhapada : position of the archer: feet pressed to the ground, one of the legs is bent, knee bent while the other is stretched back. The bust is slightly advanced. This is of course a position which implies action, a combative attitude . it shows the divinity during a battle like Durga Mahishasuramardini slaying the buffalo demon. This position can be left leg stretched and vice versa.

Nrityamurti which represents a divinity when she dances: for example Ganesh stands on a single slightly bent leg while the foot of the other is close to the knee. Ganesh dances like his father Shiva: a cosmic dance which symbolizes the change, the movement which does not stop happening at all times even if we do not perceive it (but that physicists easily prove to us today ).

Postures with the 2 legs folded

Padmâsana : the most famous, the position of the lotus: Padma means lotus. It symbolizes meditation, a state of deep internalization.. 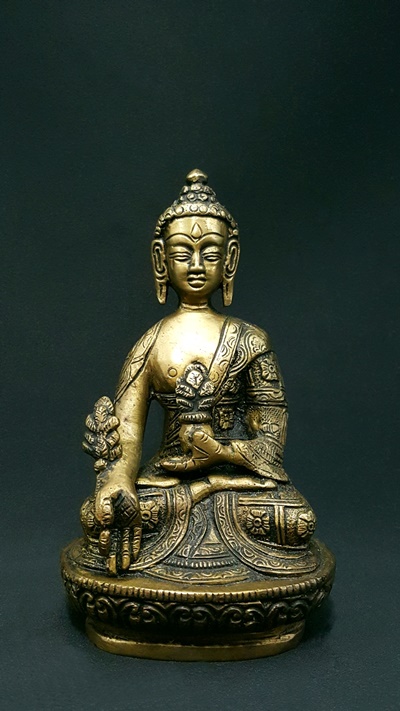 Virâsana or the hero posture : it comes in different forms. In the practice of yoga, very often the buttocks rest on the flat of the feet, the knees bent in front but in the statues, the divinity rather in half lotus (one of the 2 feet rests on the ground).

Yogâsana or yoga postures (âsana): unlike Padmâsana, the feet rest on the ground, knees raised (hands can rest on the knees). This posture is used by the deities represented as Yogi or ascetic , it is very often the case of Shiva. Depending on the other characteristics of the statue, it will point to a more specific aspect of spiritual research (hand gestures, attributes, etc.)

Sattvaparyaṅka : the noble attitude : unlike Padmâsana, both feet rest on the ground. The back is straight.

Sattvāsana : it is the symbol of attention to others . the feet are crossed at the ankles, the right foot is located in front.

Postures with only one leg folded 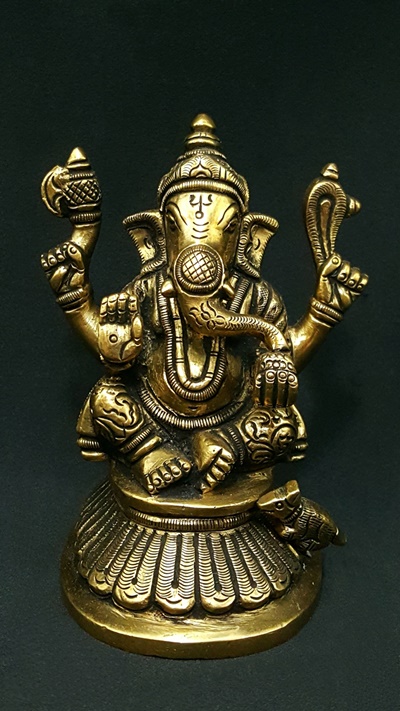 Maharajalîlâsana : the divinity is seated, the left leg bent (like the lotus position) while the right is straightened, knee bent, hand or elbow resting on it. It is the relaxed position par excellence, of "royal ease".

- Posture with 2 legs hanging, pralambapāsana, sitting in the European style, indicates that the divinity is in state of deep contemplation .

Finally and more rarely, the deities can take the lying position like Vishnu, motionless on the surface of the primordial ocean: in this form (Narayana), it represents the latent forces, the unmanifested state, the absolute.

It is therefore interesting to note that the only posture gives us many indications on the metaphysical sense of the statue: contemplative (interiorization, spiritual progress ....), message of benevolence, protection (serenity, relaxation ....), action (movement, combat, posture of the hero ...).