The Hindu gods are countless, there are said to be more than 300 million of them! How to find them, how to recognize them?
Of course the Indian pantheon is abundant, however the vast majority of gods are poorly represented and Hindus honor especially the most important.
At the beginning, it is necessary to get familiar with the essential gods and their different forms.

Pure consciousness (Brahman) is formless, when it manifests itself (i.e. takes a form), it does so in three forms called in India, the Trimurti: Brahma, the creator, Vishnu, the guarantor of balance (preserver) and Shiva, the destroyer who allows rebirth.
These three deities are accompanied by their feminine form which corresponds to their creative energy (the Shakti), their power of realization: Brahma by Saraswati, Vishnu by Lakshmi and Shiva by Parvati.
Moreover, these gods and goddesses take different forms according to the characteristics of the manifestation they express: the images and sculptures of the different forms of Shiva, for example, will possess the same aspects, which will greatly facilitate their identification. 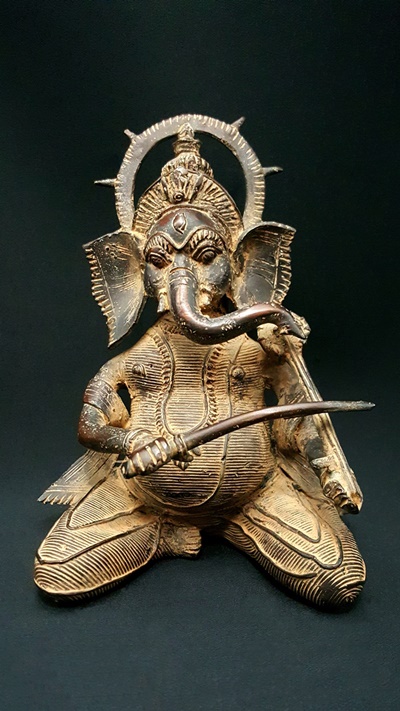 In the pictures, One of the first important points to observe is the color: most deities have light skin, however some have a skin with a color of their own: black for Kali, blue for Krishna, Shiva sometimes Vishnu, green for Rama, pink for Brahma, Ganesh is often represented red.
For a sculpture in metal, stone or wood, one must turn to other elements.

Some deities have an easily recognizable form, the most famous of which is, of course, Ganesha, the elephant-headed god. But Hanuman, the monkey god or Garuda, half man half eagle, the mount of Vishnu are also very well known. Some incarnations (avatars) of Vishnu are easily identifiable: Matsya the fish, 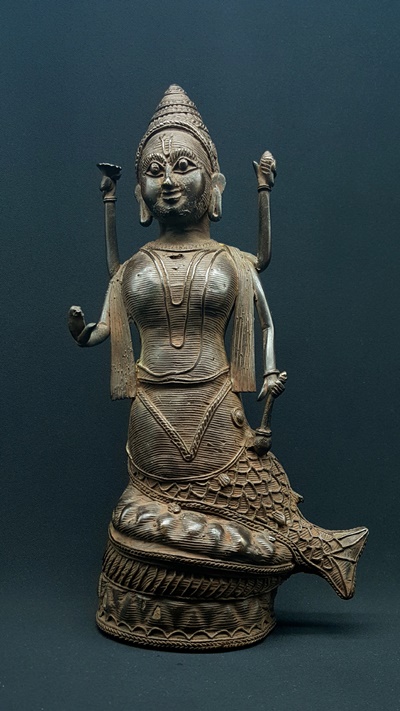 Kurma, the turtle, Varaha, the boar, Narashima, the lion man.

However, it is the attributes and mounts that will bring us an essential help to recognize a divinity.

Many deities are accompanied by specific mounts that greatly facilitate their identification:
Agni: the ram
Brahma (and Saraswati): the swan, goose and peacock for Saraswati
Bhairava : the dog
Durga (sometimes Parvati): the lion and the tiger
Ganesha: the rat
Ganga and : the crocodile
Indra : the white elephant
Kama: the parrot
Kubera : the white horse (and Kalki) and especially the mongoose
Lakshmi: the owl and the turtle
Niriti: the mule
Shani: the raven and the vulture
Shiva: the white bull
Varuna: the crocodile, the fish, Makara (mythical animal: half fish, half mammal) and the turtle
Vayu: the antelope
Yama: the black buffalo

The most famous is, no doubt, the trident of Shiva who may also accompany Parvati or Ganesh its son. Shiva can also be guessed thanks to the cobra which systematically accompanies it as well as the antelope, the crescent moon and the tambourine which are often present at its side or on it. While the conch and the disc are the two essential symbols of Vishnu. 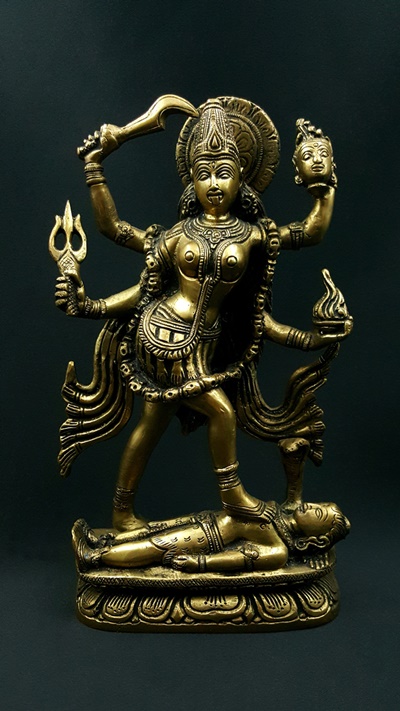 Some specific attributes:
The burin: Subrahmaya, a form of Skanda, the god of war.
Fly-whisk: Vishnu, Ganga, Ganesha.
The Rosary: Brahma and Saraswati
The bell: Shiva, Durga, Kali
The necklace of skulls: Durga
The elephant hook: Ganesh and Skanda
The fire: Agni, Shiva, Durga, Kali
The book: Brahma, Saraswati and Vishnu
The lute: mainly Saraswati
The lotus: Lakshmi, Vishnu and Surya (sun)
The club is Hanuman's main attribute (but also the one for Vishnu).
The mirror: often Parvati
Peacock feathers: Krishna

Other elements are going to be valuable: clothes and ornaments: the arm skirt for Kali or nudity for Bhairava. The throne on which it sits: the tiger skin on which Shiva sits as an ascetic, Kali on a corpse...

Some deities, less honored or more local, will be difficult to access. However, when one is interested in Hinduism, the knowledge of the main deities is done rather quickly and it becomes quite easy to identify them. However, everyone can be touched, in depth, by a statue without knowing its meaning: it depends on each one, on the moment, on the place...

An image, a statue of a Hindu deity or a deity from another religious tradition allows us to come into daily contact with the sacred or simply to be in the presence of beauty at any time of the day. The Hindu pantheon offers a wide and varied choice, so everyone can meet their Ishata Devata (their chosen deity)!