Ganesha in the Hindu pantheon is one of the sons of Shiva and Parvati (with Skanda). He symbolizes wealth, wisdom, luck.

He is represented by a man with the head of an elephant, it is the most easily recognizable Hindu god.

And it is undoubtedly the most popular, the most revered deity of India. The faithful do not fail to honor him before any undertaking: travel, steps ... any project, whatever it is, is the subject of a prayer to Ganesha before its implementation. Ganesha is the one who removes obstacles (or can multiply them), he is then called Vighneswara.

The story of his birth, the best known, is the one where Parvati, alone, was longing for Shiva's long absences: one day she came up with the idea of modeling a son, to whom she gave life in the Ganges. She asked him to guard her apartments and not to let anyone in under any circumstances. Shiva, returning home, found a young man in front of his door: furious, he beheaded him with his trident. Indignant and angry Parvati demanded that the Gods bring her son back to life before the end of the day: the Gods decided to cut the head off the first newborn found who turned out to be a baby elephant!

Ganesha, the Lord of Gana

Ganesha is considered by his most fervent disciples as the supreme God, beyond the gods of Trimurti (Brahma, Vishnu and Shiva).

Indeed Gana means categories; categories allow to measure (to establish a relation to something else, to put in relation), to differentiate, to put limits between the different forms.
Ganesha represents the communion of the macrocosm and the microcosm, one being the image of the other, one containing the other.

Indeed, beyond the anecdotal history of his birth, the form of Ganesha is particularly interesting: the elephant symbolizes the macrocosm, that is to say pure consciousness, the absolute and the human body, the manifested consciousness. And of course the "Consciousness" part (the elephant head, Ganesha is then called "Gajânaja" elephant head or Gajâmukha elephant face) is located above the human body.
This union of the macrocosm and the microcosm can also be read in the association of the elephant and the mouse, his mount: the big and the small ...

Thus in a single figuration, Hinduism invites us to become aware of the simultaneous presence of the absolute and the manifestation which cannot go one without the other. Illusion consists in perceiving only the changing forms subject to time and space.
"The lord of categories reigns over the universal intellect, the transcendent principle (Mahat tattwa) and the principles of the elements (tattva-s) derived from it" (Bhaghavat tattva).

Ganesha, by himself, invokes the famous mantra: Tat Tvam Asi, you are that or more precisely, that you are. This means the Absolute which is by nature indefinable, beyond attributes, beyond categories.

Thus the mantra evoked for Ganesha is AUM, the primordial sound, the one through which everything happened. It is recited before the accomplishment of each rite.

Ganesha, The one who removes obstacles

Vighnarajâ, the Lord of Obstruction, is a much lesser known name of Ganesha, but it is a counterpart to the One who removes obstacles.
Indra, King of the Gods, angry at not being invited to a ceremony, sent Time in the form of Obstruction to take revenge on the offending prince. But once its mission was accomplished, this genius traveled the world, sowing havoc. Brahma then called Ganesha (Master of Time) and Obstruction, defeated, put himself at his service.

Thus Ganesha, if not properly honored, can be a source of obstacles.

He also embodies wisdom, intelligence, he is the god of education. He is revered by teachers and the intellectual professions. The knowledge that he pours out makes it possible to remove the difficulties linked to ignorance.

The different forms of Ganesha

Omkara Ganapati is the representation of Ganesh in the form of Aum.

The calligraphy of this mantra can clearly show, on the left, the trunk of Ganesha.

Balaganesh, either Ganesh in its childish form.

Nritya Ganapati either Ganesha in the position of the cosmic dancer who represents change, creation. Ganesh stands on one leg slightly bent while the foot of the other is close to the knee. This is the 15th form of Ganesh out of the 32 listed. Ganesh dances like Shiva: a cosmic dance that symbolizes change, the movement that keeps happening all the time even if we don't perceive it (but that physicists easily prove to us today). It is one of the primordial laws of life.

He can also be lying down... however he is most often personified standing or sitting.

The fundamental attributes of Ganesha

Standing, in all its splendor, in an attitude of openness, Ganesh welcomes. Often dressed in red, he has four arms, one carrying the rope (lace), the other the elephant hook while the others make the gesture of protection (abhaya) and donation (varadâ).
His head has two large ears, symbolizing the winnowing baskets that separate the wheat from the chaff either the truth from ignorance.
Its curved trunk either to the left or to the right reminds us that the divine (sometimes called "twisted") is elusive to the intellect and that only intimate experience can allow us to know it. This "twisted" trunk also suggests us that the seeker of truth must be skillful and know how to get around obstacles.

His belly is huge because it contains the entire universe.
It is often surrounded by the sacred cord and the serpent: Naga, symbol of regeneration, perpetual change and latent energy. Moreover, cobras can also when united form a protective dome on the head of a deity.

Its single tusk (which according to the legends can be explained by the destruction of one of them when Shiva cut off the head of the baby elephant or during a fierce fight where, as a last resort, Ganesha broke one of its tusks and threw it on the asura (demon) Gajamukha who oppressed the world: this one was then transformed at once into a mouse) symbolizes the One without a second.

The rope Pâsha, is used to capture the demons that represent ignorance (mistakes), false beliefs, poisons that inhabit us. The rope can also illustrate links, attachment.

The elephant hook indicates the one who has the ability to see, to guide. Anhuska is used to guide the elephants in the right direction and by extension the disciples. It signifies the clairvoyance of the one who guides.

Parashu: The battle ax is the symbolic weapon that cuts the bonds of ignorance. It dissolves the darkness that obscurs the mind. It frees us from the bonds of attachment (from everything that separates us from our ultimate nature, the absolute: beliefs, inner demons, material goods...). The presence of the axe thus marks the intelligence, the clarity of the mind.

Sometimes, Ganesha hold a lotus flower: Padma symbolizes purity, beauty, perfection. It is the mother's breast, the matrix from which all things come. It is the seat of the feminine principle, the Shakti.
The lotus gives a flower of all beauty, whereas it comes from a swampy, obscure, repulsive environment: it therefore represents the possibility of transformation, of elevation. 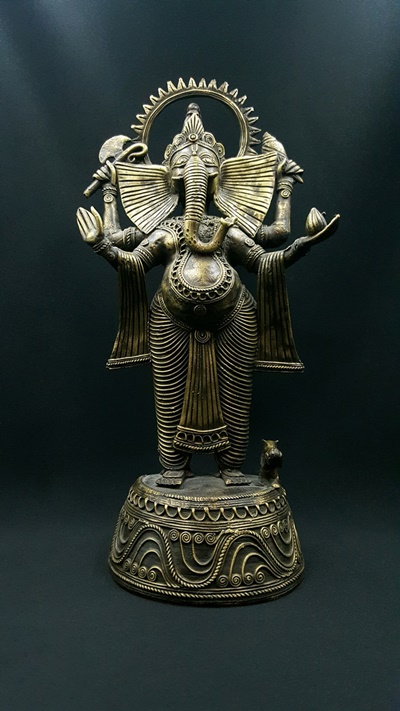 Sometimes he holds a laddhu, a sugar cane, an ear of rice, a pomegranate, a purse filled with gold coins ... signs of abundance and his great generosity.

The mount of Ganesha

The rat or the mouse: Mushaka, his mount. Symbol at the same time of lust, disease but also of prosperity and wealth, intelligence. The rat alone can represent Ganesha: it emphasizes Ganesha's ambivalence that unites opposites: absolute/relative-great/small - half-animal/half-human - lively spirit in a massive body.
Allegorically Mushaka personifies the ego (mush, its root means to steal), in the sense of the one who appropriates, of the thief: everyone lives in his world, is egocentric, sees the world from himself, his beliefs, values, fears, opinions ... No neutrality for the ego, it colors everything and cannot see reality as it is.
So Ganesha rides Musasha...

Ganesha is honored all over India and beyond in South East Asia. Rituals, daily, are more marked on Tuesdays and Fridays. Devotees offer him fruits, flowers, rather red but also camphor, sweets... His feast takes place on the fourth day of the month of Bâdhra (September-October): Ganesha Chaturthi is particularly intense in Mahârashtra, especially in Mumbai where the processions are immense, especially when his image is immersed in the sea. 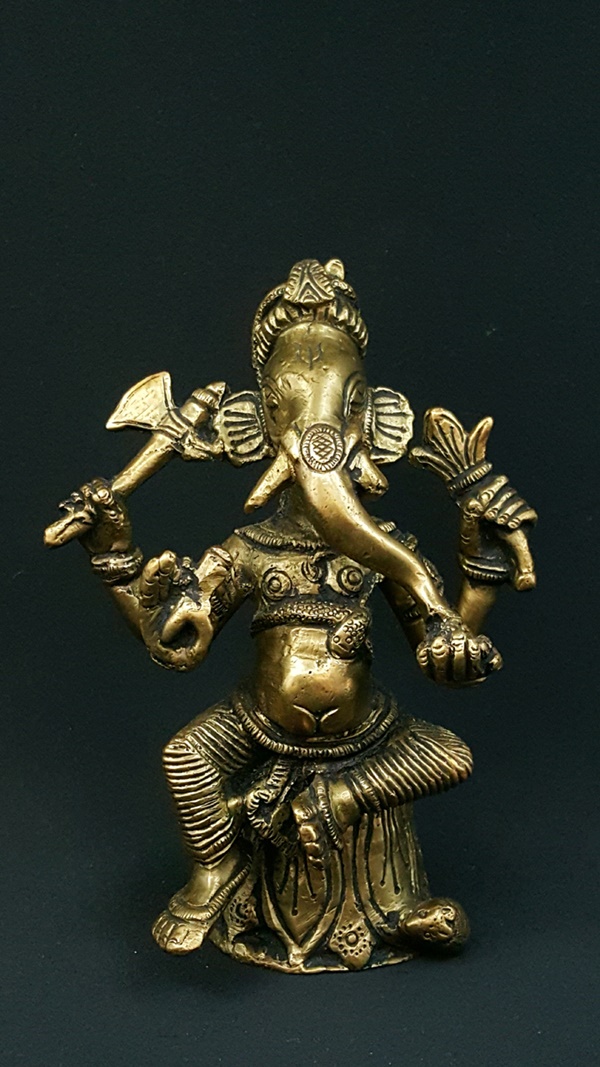