More than a thousand years ago, Mohra's art spread to the Himalayas in the present-day states of Himachal Pradesh and Uttarakand north of Delhi. The geographical conditions and relative isolation allowed this culture to flourish and maintain a unique style.

According to historians, metalworking craftsmanship developed around 600 A.D., thanks to members of the palace of justice of the kings of the region, who were experts in metalworking.
Kashmiri craftsmen were the ones who introduced the techniques of working metal on plates: it can be made of copper, brass, iron, gold, silver ... (this technique is of course also appreciated in silversmith's trade) and is often a skilful assembly of these materials.

This Mohras art has been largely magnified in sacred art and one can marvel at its works in most Hindu temples but also Buddhist temples in the region: representations of Shiva, Devi (the mother goddess), Durga are in the majority whether in the form of statues (which are also present in family altars for daily rituals), masks using the technique of repoussé or for the decoration of doors at the entrance of the temples.
Numerous sanctuaries dating back several centuries bear witness to the mastery of this art, still practiced by a few artists, unfortunately increasingly rare, living in the valley of Kullu or Chamba. The temple of Vajreshwari Devi in Brahmaur or the complex of temples of Chamba, Laxmi Narayan dating from the 10th century are magnificent testimoniesof it.

In addition, these masks can be seen during the religious festivals where they are out (Shivaratri, annual festivals specific to the divinity ...): they are then taken in procession through the city especially during the famous Dussehra festival in Kullu in October: placed on wooden carts and richly adorned with garlands of flowers, silks of many shimmering colors, they are honored by many devotees who come to pay tribute to them and celebrate them.

The technique of Mohras art is also used to make jewelry and everyday objects such as lamps, bells, musical instruments, crockery.

Art Mohras, the realization of masks

It is important to note that before beginning a sacred performance, the Hindu artist will, beforehand, perform several rituals allowing him to purify himself: it is a question for the artist to be as little as possible slave of all thoughts, personal emotions that would interfere with his work, his relationship to the divine. In addition, traditionally the sacrifice of a goat took place: the sacrifice was the pillar of spiritual practice and the link that unites men to the Gods: it is an exchange, men feed the gods who receive their blessings: well-being, prosperity, health... However for the seeker of truth, the sacrifice is above all internal: sacrifices of beliefs, attachments ... which will lead him to divine communion. 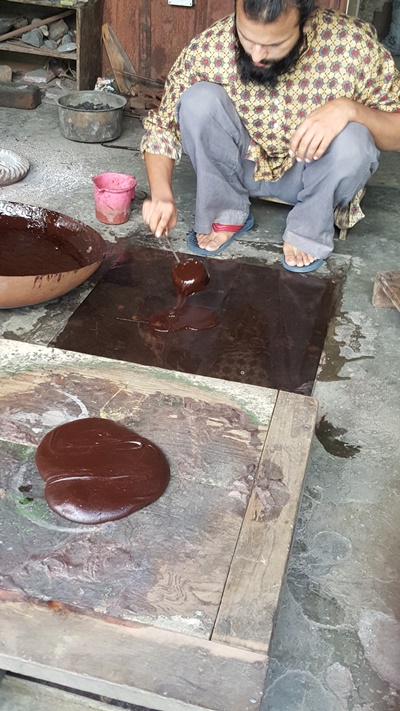 The technique used is similar to that of lost wax for the realization of bronze or brass statues: in this case, first of all, the future mask is meticulously modeled in wax by the artist who will give it its final shape. The whole is covered with a clay mixture which will be fired and will thus become the mould in which the metal alloy will be cast. Then comes a long and delicate finishing work: chasing, polishing... and even inlaying of precious or semi-precious stones.

Art Mohras, the technique of repoussé

For the technique of repoussé, the objective is to obtain a relief on a metal plate by pushing it from the back to the right side. It is a very old technique which goes back to antiquity (it was then called sphyrelaton or hammer work).
The Morhas craftsmen use wax as a support: they will, initially, heat it on a thick iron plate placed on an open hearth to the right temperature (know-how that is still transmitted from generation to generation): too hot, it becomes liquid, too cold, it is too hard and will not be malleable either. It is kneaded then spread out on a wooden plank: the thickness must be uniform in order to adhere perfectly to the brass plate which will then be adjusted on top. 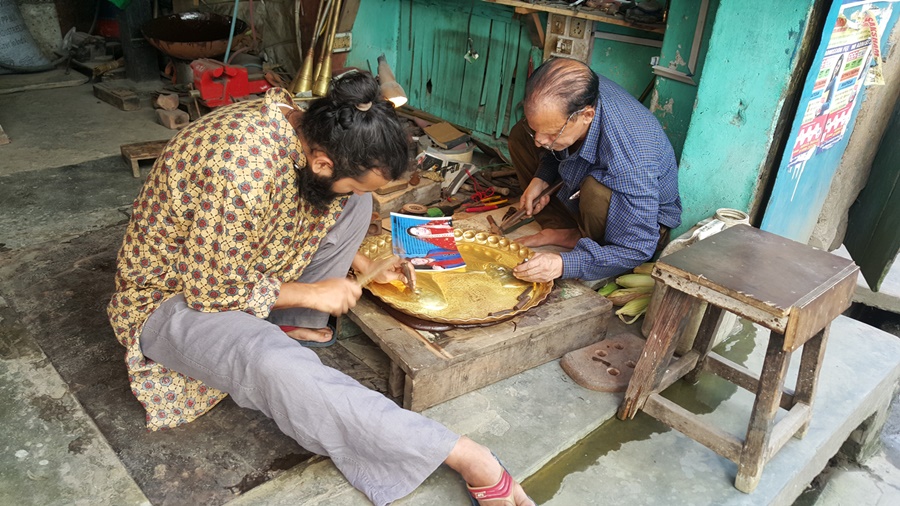 At the end of this essential task of preparation, then begins a long work of goldsmith consisting in shaping the desired image using different punches or metal chisels ... There are many types classified into various categories: the first are used to draw the patterns and shape the metal, the second aim to give "color" to the metal: they have a "specific grain" that leave an imprint forming different shades on the metal. 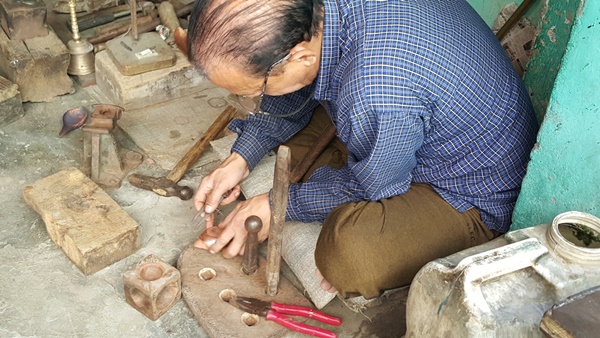 The craftsman can also work with the help of a kind of small anvil ending with a ball or a curved point. The object to be carved is then placed on the ball and hammered directly or with the help of a punch.
This art requires many tools, in addition to chisels, the artist needs pliers, many hammers with different heads, bending machines, rollers, presses, he must also heat the metal... 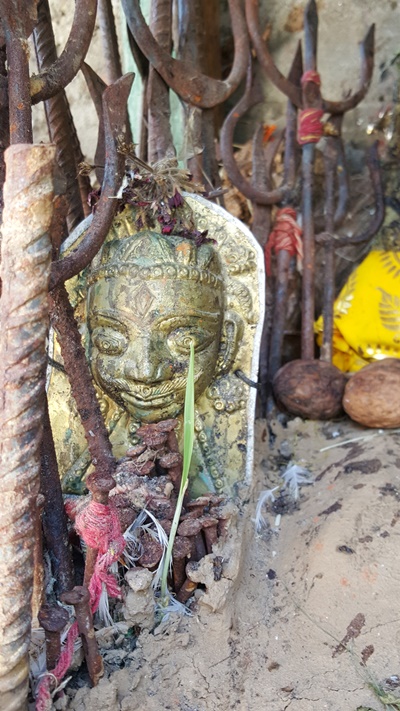 There are very few craftsmen left in Himachal Pradesh, I met four of them, especially in the art of repoussé: they live mainly from orders for musical instruments and everyday objects. They are victims of strong competition from the semi-industrial production of brass statues coming mainly from Uttar Pradesh. 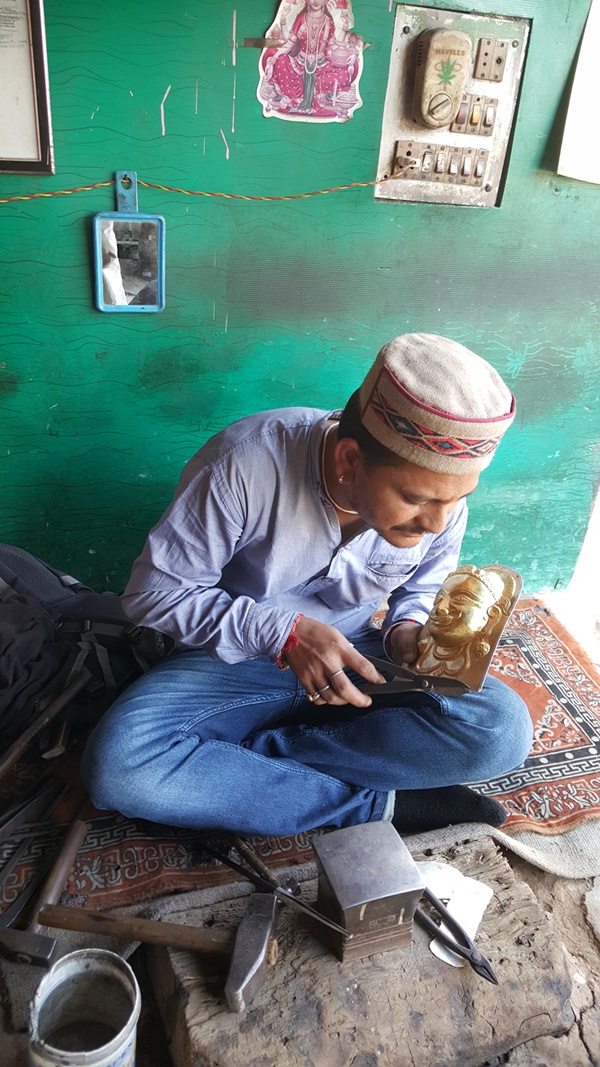 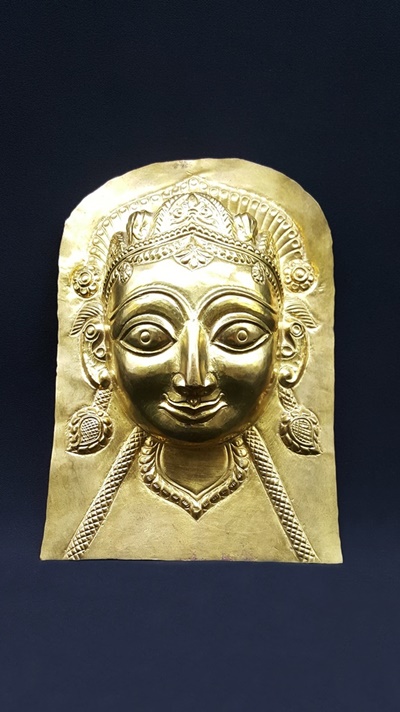