Today's Hinduism is strongly impregnated with the original Vedas but its practice has greatly evolved, many currents and schools have been created. The influence of Buddhism and Jainism is not negligible. In addition, Hinduism also borrowed from local cults and aboriginal populations at the time when it gradually imposed itself in certain less accessible regions (Himalayas, central India...).

Thus over many centuries, Hinduism has spread throughout India with disparities in the form of practices but not in the essence of sacred transmission. Such a region will privilege the cult of Durga (for example in Bengal where Sharadi Navaratri, feast in honour of Durga, is intensely celebrated) or that of Shiva in its form of Pashupati... these particularisms have many origins and the myths explain a great number of them : Shiva's home is Mount Kailash, the Ganges is far from being a single river, it is above all Ganga, goddess and wife of Shiva, symbol of fertility, of the energy that came down to earth... There are dozens of sacred places in India: rivers, mountains, cities...
A particular city, caste or region will privilege the cult of Shiva or Vishnu, in a particular form: path of knowledge or devotional practice, meditation or even practice of exercises that mobilize the body (Yoga postures, breathing techniques ...). 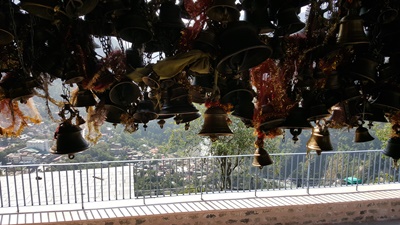 Hinduism is based on the Vedas, sacred texts dating back more than 3000 years: there are 4 of them: Rig-veda (collections of poems), Samaveda (ritual chants), Yajurveda (sacrificial formulas) and the later Atharvaveda (including aspects of magical practice). The transmission of the Vedas is done orally by the Brahmins, the priestly caste. These texts have a theoretical and philosophical aspect, but are mainly intended to describe the rituals performed by the Brahmins: it is above all a question of honouring the gods, which are multiple, and restoring the balances that may have been broken as a result of human actions. This is the purpose of the sacrifices. The universe is then populated with gods, demons and mythical creatures that must be honoured or fought.
The Brahmins are at the top of the social ladder followed by the warriors (Kshatryas) then the Vashyas; farmers, traders and craftsmen: these three castes are considered pure (they were called Arya, i.e. noble) and can therefore access the knowledge of the Vedas, participate in sacrifices, rituals... The last caste is made up of servants: the Shudras. 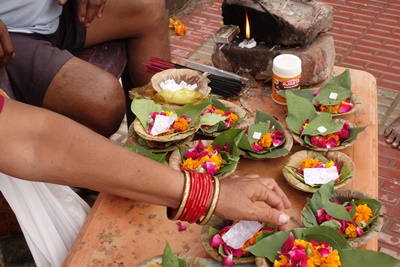 The daily life of the Aryas is governed by the Vedas: rituals, ceremonies... as well as by numerous sacraments which punctuate their entire life, from birth to death, the most important of which is the Upanayama, at the age of eight for the Brahmins, 11 for the Kshatryas and 12 for the Vashyas. This initiatory rite allows the child to be born twice, the second birth being spiritual. The sacred cord is then given to him by his master (guru).
The society at that time was very hierarchical, elitist, organized around religious life and according to his caste, each one had to accomplish the duties and rites that were incumbent upon him.
If everyone acts in conformity, social harmony and more globally that of the world is guaranteed. The Vedas insist on the importance of maintaining the cosmic order that governs life.
Therefore, the whole existence is permeated by religious life. Some Gods have as their origin natural phenomena such as Vayu, god of the winds, Agni, god of fire...
Indra is most of the time considered as the king of the gods, Prajapati as the creator (but it is sometimes Surya, sun god, Varuna, Indra or Agni).
The gods are multiple, thousands of them, but in fact they express the multiplicity of forms that the absolute takes when it is incarnated. In fact we can count 33 main gods (Aditi, solar deities, charged with making harmony reign, the Vasu, their children, personification of natural elements, the sons of Rudra representing the vital breaths sometimes benevolent, sometimes hostile...), whose importance is progressively reduced to reach the One.

Sacrifice is the pillar of spiritual practice and the link that unites men to the Gods: it is an exchange, men nourish the Gods who receive their blessings: well-being, prosperity, health...
This sacrifice passes through the fire that transmutes matter: it is above all about offerings composed of milk, butter, cereals, sweets sometimes and on important occasions, animals. These ceremonies are accompanied by songs of sacred words (mantras). The domestic rites are daily, at dawn and at dusk, but also mark all the events of life: weddings, births..., celebrations of ancestors, demons and other fabulous creatures. 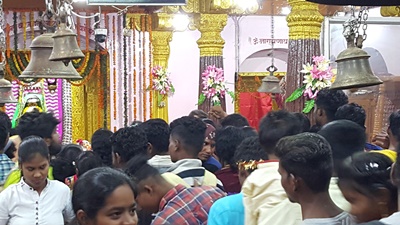 The change to Hinduism: passing through Brahmanism

However, over the centuries, the ritual practice becomes frozen, loses its mystical meaning to the benefit of material demands; the power of the Brahmins, holders of knowledge, increases to the detriment of other castes. The balance is gradually broken, and two new religions appear (around the 5th century BC): Buddhism and Jainism (founded by Mahâvîra). At the same time, the commentaries of the Vedas develop and are commonly studied: Brahmana, Aranyaka or the Upanishad: these texts are called Vedanta: the end of the Vedas with a sense of completion but also of fulfilment.
Current Hinduism owes much to the Vedas: the sacred texts remain the reference, the use of mantras, certain rites (and even certain sacrifices, such as in Nepal, at the temple of Dashinkali).
However, the sense of the sacred has evolved in depth to focus on the inner path towards the absolute: questions about the nature of the divine, the sense of ego and liberation, death and rebirth take precedence over rituals. The practice has also greatly expanded, all castes have access to it and even if Brahmins have kept a central place, everyone can practice from heart to heart: devotion has strongly developed, everyone can honour his Ishta Devata (his chosen deity).
Moreover, the Hindu pantheon has strongly evolved, the ancient main gods, Indra, Vayu, ... are still present but have a secondary place and have been replaced by the Trimurti and their Shakti: Brahman/Saraswati, Vishnu/Lakshmi and Shiva/Parvati. (Kali-Durga). These gods already existed but in secondary roles, but today the triptych they represent - creation - maintenance of balance - destruction/renewal - is the foundation of Hinduism.

A quest for the Absolute

New forms of practices appeared and the arrival of images (murtis), representations of deities, played an immense role in the practice of devotion (Bhakti), as did their removal from temples in the form of statues during festivals. Access to the gods became possible for all. From then on, the festivals gathered a large number of faithful in a great mix of men and women of all castes, backgrounds and origins.
The female deities have taken a primordial place, with the notion of Shakti, the creative feminine energy, the one that allows action and manifestation.
Pûjâ, a ritual of adoration, became the fundamental practice, non-violence, advocated by Buddhism and Jaînism was integrated.
New texts, such as the Mahabharata and the Ramayana, which are more accessible, enrich the original texts and contribute to the popularisation of Hindu doctrine.
The relationship from master to disciple becomes primordial: the Guru, liberated alive (Jivan Mukta) transmits directly to the disciple, helps him in his quest for liberation: anyone can join him and devote his life to it if it is his dearest wish! New schools, forms of transmission were then born all over India with an ever-present vitality.