The lingam, one of the most venerated forms of Shiva in India, is the subject of much misunderstanding. Many restrict its interpretation to that of a phallus more or less linked to tantric practices related to sexuality alone.
This vision is very simplistic and results from a misunderstanding of the deep meaning of this symbol from which one can, on the contrary, draw a great spiritual teaching.

The spiritual base of Hinduism is the Trimurti which allows to explain the manifested world in which we evolve: Brahma represents the creative principle, Vishnu, the preserver and Shiva the destroyer who allows the renewal. These three forces are inseparable, complementary and opposed.

Shiva is a complex deity, he is rich in teaching, in symbols: Shiva is represented under many forms:
- Rudra, the lord of tears, embodying the destructive, terrifying aspect of the god
- Shankara, the one who gives bliss, Shambhu, the benefactor...
- Shiva, Mahesvara : the great god, the lord of Transcendental Knowledge, from him comes all sources of knowledge.
- Shiva, Mahâ Yogin, the great Yogi who teaches the techniques of Yoga allowing the seeker to reach liberation: he shows us how to master the mind (beliefs, conditionings... everything that veils the ultimate reality) through the postures of the body, the breath as well as the meditation .... 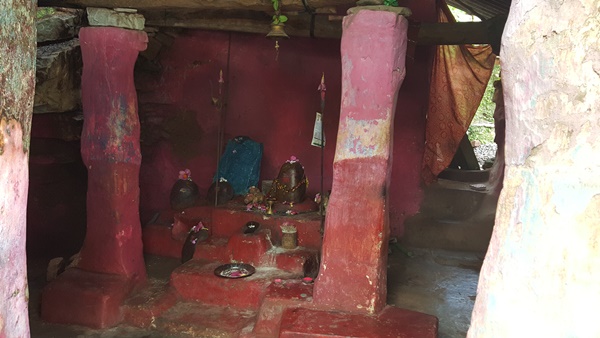 Thus Shiva, the 1008 times named (according to the Puranas), is also worshipped as Maithuneshvara, the Lord of sexual union, or Natesha, the Lord of the dance, Pashupati, the master of the herds (as guide and protector), Kâmeshvara, the ruler of desire ....
When Shiva takes a form, it corresponds to a fundamental quality or to several attributes in order to help us in our journey towards the encounter with the absolute. It is a precious, concrete help that allows many devotees to have reference points, a form of pictorial guide.

Shiva, the lingam, the purest form

Basically Shiva represents the Absolute, the Self, the primordial nature of each of us: he reminds us of the state that precedes manifestation. Shiva is the one who allows consciousness to take shape: before, the unmanifested consciousness can be likened to sleep in the sense of deep sleep, the one without dreams, where the being ceases to identify with its body (as well as with its emotions and thoughts).
This sleep is therefore to be understood as the state that precedes incarnation in a form, it is therefore a happy state: to find this state is the goal of any Sadhana or spiritual path, it is liberation, awakening, the end of attachment (in the sense of the link). 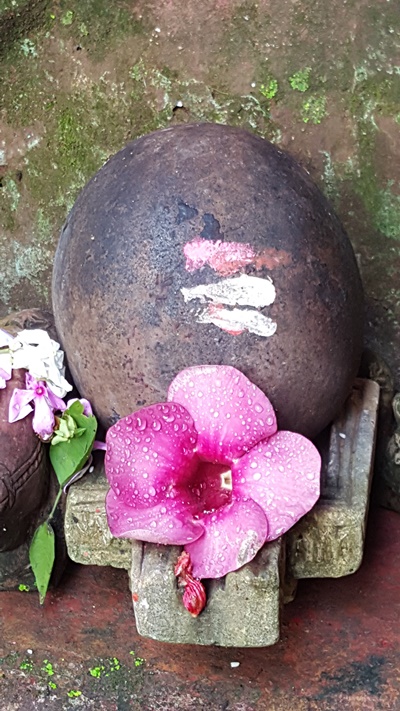 The Lingam is an abstract conformation of Shiva: this symbol represents Shiva in his form closest to the absolute: no attributes, no qualities: a simple, very uncluttered form, close to the ogive (or phallus) inserted in a Yoni (the receptacle) and placed on a pedestal. It reminds us of our divine nature, our essence.

The origins of the Lingam are numerous. It is likely that the animist populations of Northern India worshipped the sacred in the form of a pillar or a totem (still found today among contemporary Adivasis) before the arrival of Hinduism.
The notion of Lingam appears for the first time in the Linga Purana: while Brahma and Vishnu were arguing about who was the supreme God, a pillar of fire (an abstract form of Shiva) appeared between them from the waters that had engulfed the world. Each wanted to prove his worth by determining its height, Vishnu took the form of a boar and dived into the depths while Brahma, transformed into a goose flew to the highest. But neither of them could measure the column of fire. They then recognised the "superiority" of Shiva, his primordiality.
Other legends exist about his origin, but the important thing is the richness of the teachings it conveys.

The lingam can be considered the first form to emerge from the absolute (and some texts indicate that at the end of the cycle of a world, it will also be the last form before the return to the unmanifest).

Thus the lingam by virtue of its verticality is related to fire: the fire that symbolizes destruction, renewal, the fire of knowledge that destroys ignorance, the fire of love that annihilates all separation...

Its verticality symbolizes the inseparable link between earth and heaven: earth represents the manifested and heaven, the absolute.
However, the Lingam is never represented alone, it is always accompanied by the Yoni: it is the feminine principle, the Shakti, the creative energy. The two are therefore inseparable. Shiva cannot manifest himself in the form of the Lingam without the Yoni.
Thus in any manifestation, there is the absolute and the manifested: a stone, a tree, an animal... and obviously the Human being understands in himself the materiality and the immateriality.

The lingam symbolizes fertility, procreation in its most spiritual acceptance : all "things," all phenomena can only come from the union of these two male and female principles. The Yoni is the matrix impregnated by Shiva. Everything in the manifested universe is the result of this law; pure sexuality between a man and a woman is only one particular aspect of this law.
The Lingam cannot therefore be reduced to a basic sexual interpretation as it is frequently presented to us; on the contrary, when Hindus venerate it, they venerate the primordial creative principle, the source of the universe, the essence of our nature.
"Because it is the origin of all growth, Nature is compared to a matrix... This matrix is Nature, the basis of all existence. He who enjoys it is Shiva, he is the dispenser of pleasure" (Shiva Purana, 1, 16, 101).
The Yonis, matrices are thus innumerable according to the species, the kingdoms (vegetable, animal...). But the universal principle of creation is the same: union of an active and passive principle, masculine-feminine, positive-negative...and desire is at the origin of the manifestation with a search for enjoyment, in the sense of "pure happiness", joy without opposite, divine experience. 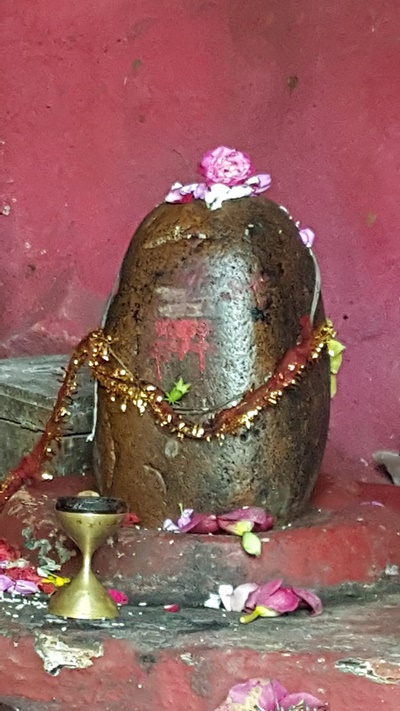 The legends and various hindus sacred texts sometimes seem to contradict each other, attributing primacy to one deity to the detriment of another: this depends on the period, the dominant current, the place... however the notion of Trimurti is omnipresent and the Lingam reminds us this.
The Lingam is always accompanied by a Yoni (which can simply be the earth on which it rests and which symbolizes the matrix) and sometimes by a base: in this case, the base represents Brahma, the Yoni Vishnu and the Lingam, Shiva. Again, I can only marvel at the richness of the teaching transmitted by Hinduism in its many forms.

Sometimes Shiva is worshipped as a father who becomes a substitute for the procreative principle: the father, possessor of the phallus, becomes its symbol. His sperm (Bija) represents the essence of life; it is then represented in many ways: the Soma (the elixir of life), the Ganges, the beverages of immortality in the texts...
This veneration of the image of the father is perhaps easier to understand and to grasp for many disciples than that of the Lingam, which is far too abstract. 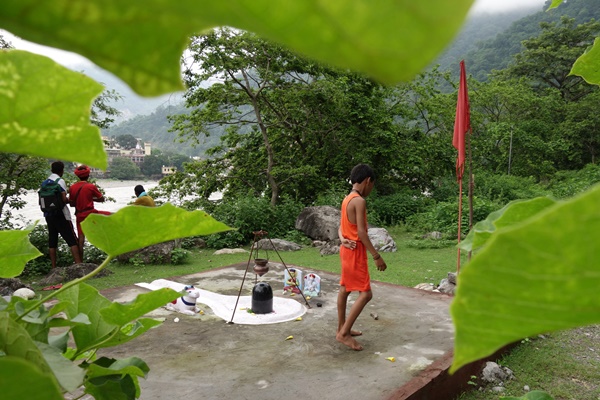 The various forms of Lingam

Even before the well-known form of the Lingam, the Lingam is also expressed in a form that is hardly materialized, such as the ether, the column of fire or even a formless mass (Kedara-natha in Varanasi...).
Similarly, the cosmic egg is one of the forms of the Lingam: an oblong shape, a union of the feminine and the masculine. Source of life, the egg can also symbolize the universe in its totality.
The forms, born of itself, Swayambhu are sacralized everywhere in India: they are innumerable. Some are famous, such as the 12 Jyotirs Lingams (rock shapes around which a temple has been built) located in different sacred places in India: Omkareshvwar, Kedarnath, Pune....
They can be of mineral or vegetable nature, sometimes ephemeral (ice lingam). Many natural Lingams, present in certain temples and private altars come from the famous Narmada river, they are black in color and ovoid in shape.

I have seen and admired many forms of man-made lingam or Manusi Lingam during my wanderings in India: they may correspond to particular aspects or requests (such as rituals to promote health...). Originally the lingam was shaped in an oblong form without any decoration then during the Kushan era, lingams started to be sculpted (mostly in stone, in the Elephanta, Ellora, Mahaballipuram caves...) with the faces of Shiva (up to 32 faces) or sometimes simply represented by a simple bun.... Then metal made its appearance and they were cast in bronze, brass with the golden age of the Chola empire. 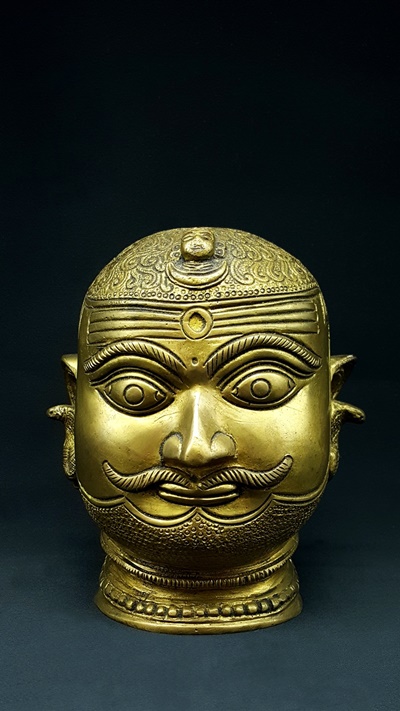 In the same times, the Mukhalinga appeared around the 8th century A.D. to preserve the power of the lingam.
The Mukhalinga, literally lingam with one side that can be used to cover a Lingam. A linga can be transformed into a mukhalinga by covering it with a kavacha ("armor"), a metal cover carved in the shape of Shiva's head. It can contain up to 5 faces (carved in the 4 directions plus one towards the sky): each face can represent a different aspect of Shiva.

The Bhutas Lingam, located in southern India, manifest Shiva in the form of the 5 elements: ether, air, water, fire, earth.

The study of the Lingam has been the subject of many writings, commentaries, theses... and this modest article has just the ambition to awaken interest for a symbol that I find of a extreme wealth and a great beauty by the perfection and the simplicity of its lines! 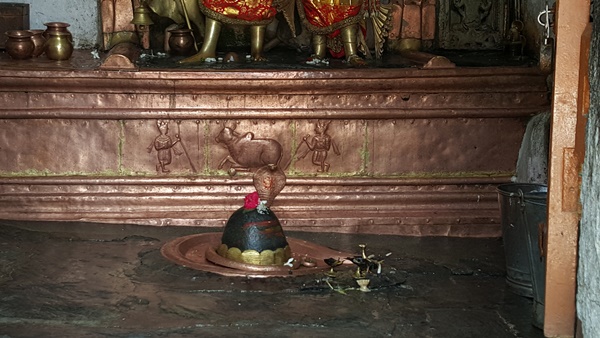